Home
Civil Rights and the Making of the Modern American State

Civil Rights and the Making of the Modern American State 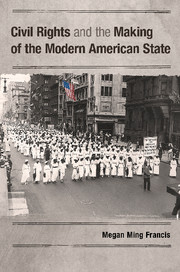 Did the civil rights movement impact the development of the American state? Despite extensive accounts of civil rights mobilization and narratives of state building, there has been surprisingly little research that explicitly examines the importance and consequence that civil rights activism has had for the process of state building in American political and constitutional development. Through a sweeping archival analysis of the NAACP's battle against lynching and mob violence from 1909 to 1923, this book examines how the NAACP raised public awareness, won over American presidents, and secured the support of Congress. In the NAACP's most far-reaching victory, the Supreme Court ruled that the constitutional rights of black defendants were violated by a white mob in the landmark criminal procedure decision Moore v. Dempsey. This book demonstrates the importance of citizen agency in the making of new constitutional law in a period unexplored by previous scholarship.

'Civil Rights and the Making of the Modern American State is an outstanding contribution to the fields of race and politics, American political development, and legal studies. Drawing on rich archival sources, Francis redefines our understanding of the early civil rights movement, the NAACP, and its relationship to the American presidency and Congress. Her research forces us to revise our understanding of the complicated relationships between early twentieth-century presidents and the black movement for racial justice. This work also sharply highlights how social movement organizations tack back and forth between multiple strategies to achieve their goals. Students of American politics, history, legal studies, race and politics, and social movements will all find this a must-read.'

Michael C. Dawson - John D. MacArthur Distinguished Service Professor of Political Science and the College, and Director, Center for the Study of Race, Politics and Culture, University of Chicago

'Civil Rights and the Making of the Modern American State is a singular achievement in the field of American political development. Francis forces us to reconsider the established narrative of how change occurs in America by drawing our attention to the collective, organized work of African Americans resisting the oppression of Jim Crow injustice. This book plumbs the depths of previously understudied archives and offers a beautifully written, rich, historical narrative. Francis tells a new story about the NAACP, the Supreme Court, and, ultimately, our nation. Forget everything you think you know about how change happens.'

'With the publication of this important and original book, Megan Ming Francis establishes herself as an outstanding young scholar of race inequality and the national state. In it, Francis documents the way in which the NAACP came to formulate a litigation strategy to address lynching atrocities, having tried unsuccessfully to mobilize the White House and Congress in this cause. Francis's findings deepen our knowledge of both the civil rights movement and the American state. The book will be influential and should be essential reading for scholars of American politics, history, sociology, and African American studies.'

'In this original, incisive, and empirically convincing book, Megan Ming Francis documents how the NAACP's manifold political challenges to racial violence in the early twentieth century contributed to the development of the modern American constitutional state. Along the way, Francis illustrates why historical institutional analysts should grant greater attention to the important roles of organized citizen groups in shaping civil rights law and national legal authority. The book is a brilliant and important achievement.'

Michael McCann - Gordon Hirabayashi Professor for the Advancement of Citizenship, University of Washington

'Francis’s contribution rests on solid, careful scholarship and argumentation that should be widely read and cited.'

'Francis challenges the way scholars have discussed the political and constitutional processes of state-building in the early 20th century by placing the NAACP and ordinary citizens as critical actors in the creation of modern institutional definitions of citizenship. … should be useful to researchers in the fields of African American and United States history considering the impact of black political activism and civil rights organizations … Francis’s study should prove useful in re-conceptualizing how citizenship rights were expanded in the modern American state.'