The Politics of Public Goods Provision in India's Urban Slums 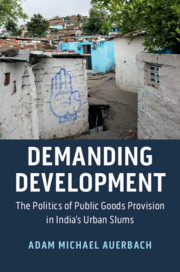 India's urban slums exhibit dramatic variation in their access to local public goods and services - paved roads, piped water, trash removal, sewers, and streetlights. Why are some vulnerable communities able to demand and secure development from the state while others fail? Drawing on more than two years of fieldwork in the north Indian cities of Bhopal and Jaipur, Demanding Development accounts for the uneven success of India's slum residents in securing local public goods and services. Auerbach's theory centers on the political organization of slum settlements and the informal slum leaders who spearhead resident efforts to make claims on the state - in particular, those slum leaders who are party workers. He finds striking variation in the extent to which networks of party workers have spread across slum settlements. Demanding Development shows how this variation in the density and partisan distribution of party workers across settlements has powerful consequences for the ability of residents to politically mobilize to improve local conditions.

'Millions of people across the world live in urban slums. In this important book, Auerbach asks why some slum communities feature better living conditions than others. Based on rigorous, multi-method research and deep contextual knowledge, he traces how party workers broker access to public services and, against conventional wisdom, shows that more diverse communities have superior public goods provision precisely because they feature multiple, competitive party worker networks.'

'Auerbach’s book takes us to the forefront of contemporary urbanization, examining how slum dwellers in India secure basic services and infrastructure. Combining extensive qualitative fieldwork with survey data, he finds that slums with dense networks of party workers obtain more paved roads, drainage, and other crucial infrastructure. This stellar example of multi-method scholarship will help cement the ‘urban turn’ in comparative politics.'

'With this book, Auerbach emerges as a leader among scholars who look at the urban poor from the inside out. His painstaking ethnographic work and impressive original statistics persuade us that without looking at slums’ internal politics, little can be predicted about service levels and other outcomes. Laying bare these patterns of local politics, and explaining how they matter, will remain Auerbach’s abiding contributions to the study of the poor in cities.'

'Demanding Development significantly advances the literature on democracy. Drawing on a wealth of ethnographic and survey data, Auerbach paints a picture of Indian slums that sets a new standard for depth and rigor. He lays waste to the widespread view of slums as passive communities manipulated by politicians. In a magisterial portrait of how slum politics actually work, Auerbach shows us how slum dwellers mobilize to make claims, making the powerful case that for all their diversity and desperation, slums can be arenas of solidarity and political organization. Demanding Development will fundamentally change the debate on the politics of the urban poor.'

‘The real merit of the book lies in explaining differentiated responses from the slums, linked both to the forms and nature of political mobilization, and its impact on the quality of public service delivery … This multilayered book challenges us to rethink our approach about the nature of political competition, party organization, party leadership, ethnic politics, and the quality of public service delivery.’

‘… the book is an interesting analysis of how the poorest of the poor use democracy to ‘demand development’ in India while living in a settlement which tends to be ignored in developing countries. It is extremely well-written and it contains interesting qualitative interviews that not only help explain the mechanism behind the results, but also bring the slums to life for the reader.’

‘Demanding Development is an impressive account of the local political institutions that enable slum residents to demand public goods. It is a compelling and convincing work, and should be considered essential reading for anyone interested in distributive politics, urban politics, political parties, clientelism, brokers, and community-driven development. Highly recommended.’

‘Demanding Development is a pathbreaking book … The extensive, immersive fieldwork provides a level of richness and complexity to political brokerage that is rare and very welcome in the study of distributive politics…The book will appeal to political scientists, urban planners and development studies audiences who are interested in better understanding the relationship between politics and public services in Global South cities.’

‘The book makes an important contribution to understanding the vibrancy and forms of citizen claim-making; how political parties embed themselves in the social life of citizens; and how these processes combine to produce differentiated access to public services in urban India.’

‘Demanding Development represents a nuanced and authoritative account of the mechanics of electoral mobilization and patronage on the ground in slum settlements, highlighting brokers as the lynchpin that connects these two forms of political activity.’

‘Demanding Development is an impressive work drawing on both ethnographic research and a quantitative dataset. It helps one understand the complex process of engagement of slum dwellers in India to demand and avail public services through the channel of local party leaders…We highly recommend this book to the social science community studying comparative politics in South Asia in the context of slum settlements’

‘Auerbach’s book is filled with remarkable insights that emerge from attentive questions … It is counterintuitive at times and thoroughly thought-provoking.’

‘… Demanding Development provides a groundbreaking perspective on how citizens build responsive state institutions from the bottom up.'