Home
Renaissance Ethnography and the Invention of the Human

Renaissance Ethnography and the Invention of the Human 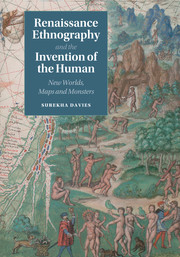 Giants, cannibals and other monsters were a regular feature of Renaissance illustrated maps, inhabiting the Americas alongside other indigenous peoples. In a new approach to views of distant peoples, Surekha Davies analyzes this archive alongside prints, costume books and geographical writing. Using sources from Iberia, France, the German lands, the Low Countries, Italy and England, Davies argues that mapmakers and viewers saw these maps as careful syntheses that enabled viewers to compare different peoples. In an age when scholars, missionaries, native peoples and colonial officials debated whether New World inhabitants could – or should – be converted or enslaved, maps were uniquely suited for assessing the impact of environment on bodies and temperaments. Through innovative interdisciplinary methods connecting the European Renaissance to the Atlantic world, Davies uses new sources and questions to explore science as a visual pursuit, revealing how debates about the relationship between humans and monstrous peoples challenged colonial expansion.

‘Surekha Davies brings an astounding arsenal of historiographic tools to her interpretation of the ethnographic images on maps and draws on a vast visual and textual archive to provide a compelling account of their evolution, meaning and spread. It is hard to imagine that anyone else would be better placed to interpret this material.’

‘Surekha Davies presents a powerful case for the pivotal role that maps - artifacts conceived as dynamic relations between images and words - played in shaping the attitudes towards the peoples Europeans imagined, or knew to exist, or actually encountered beyond their borders during the age of exploration. Thoroughly researched and richly illustrated, this book will stand as an important reference for readers interested in the shared origins of cultural anthropology, geography, racial ideologies, and imperialism in the West.’

‘Europeans during the Renaissance believed that monsters trolled the distant edges of the world. In this fascinating and beautifully illustrated study, Surekha Davies reveals the crucial role that illustrated maps played in simultaneously maintaining and challenging this ancient wisdom, showing how Europeans struggled to understand the peoples they met during the age of discovery and exploration.’

'Renaissance Ethnography and the Invention of the Human is a powerful, erudite, and elegant contribution to our knowledge of the interweaving of cartography, colonialism, and cultural encounter in the century and a half after Columbus set sail. Placing maps at the core of debates about the nature of humankind, this book is essential reading for Renaissance historians and cartographic historians alike.'

'Renaissance Ethnography and the Invention of the Human …will appeal to scholars interested in Renaissance history in general, and to any individual who studies the complex interactions of cultures and those who interpret them, both in writing and graphically in print.'

'Fluently written and elegantly produced, this is an original, perceptive and finely researched addition to the literature on the European discovery of mankind.'

'Renaissance Ethnography and the Invention of the Human is a true gem in the history of ideas which opens up new avenues to think about the intricate relationship among ethnography, cartography, history of science, and medicine in a time when the world became globalized for the first time … The book will prove crucial for students and advanced scholars of the early modern period, not only historians, historians of science, ethnologists, and historians of cartography, but also scholars of the Atlantic world, art historians, literary scholars, global historians, and environmental historians.'

'Sometimes a reviewer comes across a book and devoutly wishes that s/he had written it first. This is such a book. Whether the reader engages in cultural history, history of cartography, history of art, or the new wave of early modern global history, this book will hold fresh ideas, synthetic mastery of rapidly expanding literature, and fundamental topicality, even about what defines humanity itself. This book ultimately locates sixteenth-century stereotypes within cultural systems of social hierarchy, which partly shaped colonial policy.'

'Based on a comprehensive sample of over 2,000 manuscript and printed maps housed in collections across Europe and the United States, Renaissance Ethnography presents the most authoritative analysis of the iconography of Amerindian peoples on Renaissance maps to date. Covering ethnographic imagery related to seven New World regions produced in six European centers of mapmaking between 1492 and 1650, Surekha Davies’s wide-ranging account offers a fine demonstration of the merits of a comparative and interdisciplinary approach. Its original arguments about the role of mapmakers as knowledgemakers within the context of colonial expansion and shifting ideas about the human ensure that this book will be of interest not just to historians of cartography, but also to cultural historians, historians of art, and historians of science.'

'Based on extensive research conducted in a plethora of archives, replete with more than a thousand footnotes sustaining the 300 pages of text, this magnificently documented study builds on the work of Anthony Pagden, Lorraine Daston and Katherine Park, Mary Baines Campbell, Frank Lestringant and a host other scholars. Sorting through maps in which fantasy and veracity are two sides of the same coin, it informs us, too, about how attraction and repulsion bear on the psyche. No less, with remarkable precision, Davies shows how the beginnings of ethnography are directly related to the growth of early modern cartography.'

'[An] extraordinary and indispensible contribution to the history of how early modern Europeans confronted the challenge of defining what it meant to be human in a rapidly expanding world.'

'Moreover, at a time of concerted interest in matters of humanism and post-humanism in early modern studies, and the emergence of the Anthropocene as a critical (in all senses of the word) category of analysis that challenges both epistemology and ontology, Davies’ considerable achievement anticipates future projects that reconsider the processes of mapping and codifying natural phenomena 'within a longer chronology of attempts to come to terms with the concept of the human … and the implications of understanding ‘human’ as a fluid, subjective category that is inseparable from its environment'.'