Contributions of the Genetic/Genomic Sciences to Developmental Psychopathology 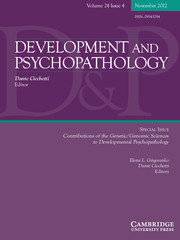