Home
In Search of Power

In Search of Power

African Americans in the Era of Decolonization, 1956–1974 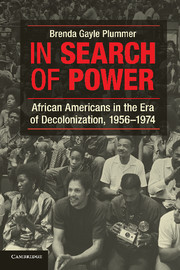 In Search of Power is a history of the era of civil rights, decolonization and Black Power. In the critical period from 1956 to 1974, the emergence of newly independent states worldwide and the struggles of the civil rights movement in the United States exposed the limits of racial integration and political freedom. Dissidents, leaders and elites alike were linked in a struggle for power in a world where the rules of the game had changed. Brenda Gayle Plummer traces the detailed connections between African Americans' involvement in international affairs and how they shaped American foreign policy, integrating African American history, the history of the African Diaspora and the history of United States foreign relations. These topics, usually treated separately, not only offer a unified view of the period but also reassess controversies and events that punctuated this colorful era of upheaval and change.

‘In Search of Power is a masterpiece. Plummer has seamlessly woven together a thought-provoking tapestry from often disparate threads in African-American, African, Caribbean, international, and American history. In doing so she deepens the complexity of these struggles. It was not just the Left that fought; it was not always the liberals who compromised and capitulated; and it was not always racially binary. In Search of Power is simply the result of a historian at the top of her craft.’

Carol Anderson - Emory University, Atlanta, and author of Eyes Off the Prize: The United Nations and the African American Struggle for Human Rights, 1944–1955

‘With theoretical sophistication and historical nuance, Brenda Gayle Plummer has written a wonderfully provocative book. In Search of Power boldly illustrates the productive work of ‘hybrid histories’ as it charts the complex convergence of the hopes, dreams, and failures of black freedom struggles at home and abroad. I suspect we will be grappling with this book for a long time to come.’

‘Judicious in its assessments, passionately written and with some memorable turns of phrase, Plummer has brought together a lot of information from disparate sources to provide a well-etched portrait of a particularly turbulent era in African American history.’

'In her stunning study of African Americans during the era of decolonization, Brenda Gayle Plummer makes a major contribution that will be widely read. Thoroughly researched and elegantly written, In Search of Power adds to understanding of the incredibly diverse people of color who struggled for power during the long and tumultuous 1960s.'

'In Search of Power is a needed reminder to scholars and students focusing on this period and the aftermath that while we rightly examine the parallel struggles of blacks in America and those in Africa and the colonized Americas, the struggles were not identical and the failed expectations for African American rights in the United States can be better understood by looking at the relationship of these two struggles.'