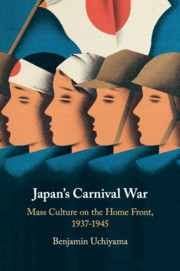 Japan in the Asia-Pacific War years is usually remembered for economic deprivation, political repression, and cultural barrenness. Benjamin Uchiyama argues that although the war created the opportunity for the state to expand its control over society and mass culture, it also fractured Japanese people's sense of identity, spilling out through a cultural framework which is best understood as 'carnival war'. In this cultural history, we are introduced to five symbolic figures: the thrill-seeking reporter, the defiant munitions worker, the tragic soldier, the elusive movie star, and the glamorous youth aviator. Together they represent both the suppression and proliferation of cultural life in wartime Japan and demonstrate that 'carnival war' coexisted with total war to promote consumerist desire versus sacrifice, fantasy versus nightmare, and beauty versus horror. Ultimately, Uchiyama argues, this duality helped mobilize home front support for the war effort.

‘In Japan's Carnival War, Benjamin Uchiyama brilliantly proposes a new, dynamic paradigm of Japan's total war in Asia. His ‘carnival kings' - the circus freak, the reporter, the munition worker, the soldier, the movie star, and the tragic kamikaze pilot - embody and negotiate a strange mix of incitement and excitement, the hybridization of masculinity and femininity, and the fluidity of suppression. A must-read.'

‘This is a powerfully original look at the home front. Many Japanese supported the war effort, Uchiyama argues, not because of emperor worship, but because - like the other belligerents - they ‘consumed' the war, enjoying sensational battlefield reportage, heroic narratives of the aviator, and the perks of well-paid munitions workers.'

‘A remarkably fresh, indeed a startling, cultural history of total war. Uchiyama shows how Japanese people made sense of their own experience by engaging media icons such as the ‘munitions worker' or the ‘movie star' with irreverent mockery. Must reading for anyone interested in the global experience of World War II.'

‘This is the rare book that is both an impressive scholarly achievement and a fascinating read.’

‘In Japan’s Carnival War, Benjamin Uchiyama offers a breath of fresh air to readers all too familiar with the narrative of tightening restrictions and stringent censorship that characterizes most depictions of Japan during the years of total war … The bottom line: this is an excellent companion book for those who have read widely on the war and crave a fresh perspective … Uchiyama’s exhaustive archival work also enlightens the reader with thought-provoking details absent from standard histories of Japan at war …’