Skip to main content Accessibility help
Internet Explorer 11 is being discontinued by Microsoft in August 2021. If you have difficulties viewing the site on Internet Explorer 11 we recommend using a different browser such as Microsoft Edge, Google Chrome, Apple Safari or Mozilla Firefox.
Open global navigation
Cambridge University Press
Home
> Subjects
> An SPSS Companion for the Third Edition of The Fundamentals of Political Science Research 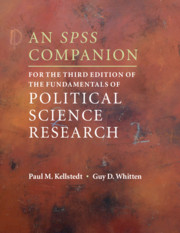 An SPSS Companion for the Third Edition of The Fundamentals of Political Science Research offers students a chance to delve into the world of SPSS using real political science data sets and statistical analysis techniques directly from Paul M. Kellstedt and Guy D. Whitten's best-selling textbook. Built in parallel with the main text, this workbook teaches students to apply the techniques they learn in each chapter by reproducing the analyses and results from each lesson using SPSS. Students will also…