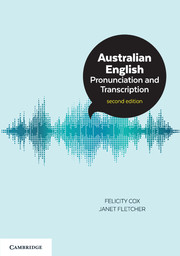 Australian English Pronunciation and Transcription is the first textbook to clearly describe Australian English speech patterns. Now in its second edition, this ground-breaking work addresses speech production characteristics and provides detailed instruction in both phonetic and phonemic transcription of the dialect. Each chapter features practical exercises to allow readers to develop skills and test their knowledge as they progress through the text. These exercises are complemented by an extensive companion website, which contains valuable explanatory materials, audio examples and accompanying…