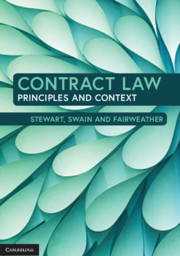 Contract Law: Principles and Context presents the development of contract law through a considered selection of cases that are both authoritative and used as factual examples to explain the law. The text introduces readers to the nature and range of contracts, the process for making a contract, rights and duties, adjustments to contracts, vitiating factors and unfair conduct, ending contracts, and remedies and restitution. The text considers the historical development of contracts through case law and legislation, then takes the…