With Selections from the Objections and Replies 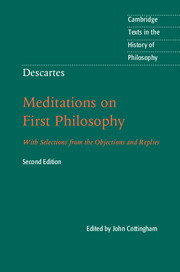 Edited and translated by John Cottingham, University of Reading

Descartes's Meditations on First Philosophy remains one of the most widely studied works of Western philosophy. This volume is a refreshed and updated edition of John Cottingham's bestselling 1996 edition, based on his translation in the acclaimed three-volume Cambridge edition of The Philosophical Writings of Descartes. It presents the complete text of Descartes's central metaphysical masterpiece, the Meditations, in clear, readable modern English, and it offers the reader additional material in a thematic abridgement of the Objections and Replies, providing…