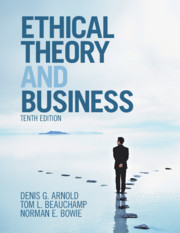 For forty years, successive editions of Ethical Theory and Business have helped to define the field of business ethics. The 10th edition reflects the current, multidisciplinary nature of the field by explicitly embracing a variety of perspectives on business ethics, including philosophy, management, and legal studies. Chapters integrate theoretical readings, case studies, and summaries of key legal cases to guide students to a rich understanding of business ethics, corporate responsibility, and sustainability. The 10th edition has been entirely updated, ensuring…