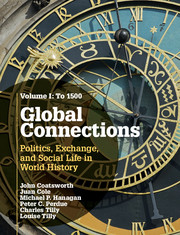 The first textbook to present world history via social history, drawing on social science methods and research. This interdisciplinary, comprehensive and comparative textbook is authored by distinguished scholars and experienced teachers, and offers expert scholarship on global history that is ideal for undergraduate students. Volume 1 takes us from the origin of hominids to ancient civilizations, the rise of empires, and the Middle Ages. The book pays particular attention to the ways in which ordinary people lived through the great…