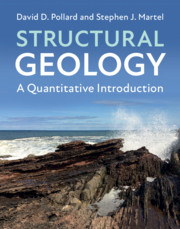 Tackling structural geology problems today requires a quantitative understanding of the underlying physical principles, and the ability to apply mathematical models to deformation processes within the Earth. Accessible yet rigorous, this unique textbook demonstrates how to approach structural geology quantitatively using calculus and mechanics, and prepares students to interface with professional geophysicists and engineers who appreciate and utilize the same tools and computational methods to solve multidisciplinary problems. Clearly explained methods are used throughout the book to quantify field data,…