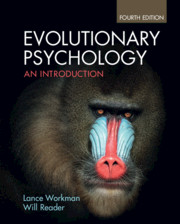 While evolutionary psychology is a fascinating science, it is also often misunderstood. In this highly acclaimed undergraduate textbook, Workman and Reader assume no prior knowledge of evolution and instead carefully guide students towards a level of understanding where they can critically apply evolutionary theory to psychological explanation. The authors provide an engaging and balanced discussion of evolutionary psychology without committing to a specific school of thought, and organise chapters around topics familiar to psychology students. Retaining the successful structure and…