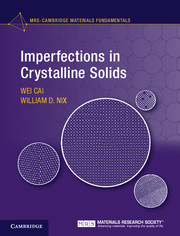 This textbook provides students with a complete working knowledge of the properties of imperfections in crystalline solids. Readers will learn how to apply the fundamental principles of mechanics and thermodynamics to defect properties in materials science, gaining all the knowledge and tools needed to put this into practice in their own research. Beginning with an introduction to defects and a brief review of basic elasticity theory and statistical thermodynamics, the authors go on to guide the reader in a step-by-step…