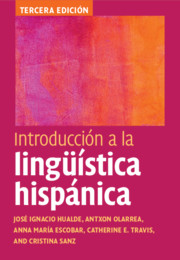 Written entirely in Spanish, this is the ideal introduction to Spanish linguistics for students. Using clear explanations, it covers all the basic concepts required to study the structural aspects of the Spanish language – phonetics and phonology, morphology, syntax and semantics – as well as the history of Spanish, its dialects, and its linguistic variation in Latin America, Spain, and the US. This third edition incorporates new features designed to enhance its usefulness for classroom teaching: a new chapter on…