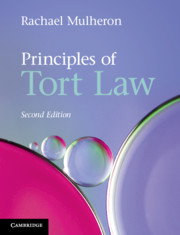 Presenting the law of tort as a body of principles, this authoritative textbook gives an incisive understanding of the subject. Each tort is carefully structured and examined within a consistent analytical framework that guides students through its preconditions, elements, defences and remedies. Clear summaries and comparisons accompany the detailed exposition, and further support is provided by diagrams and tables which clarify complex aspects of the law. Critical discussion of legal judgments encourages students to develop strong analytical and case-reading skills,…