Skip to main content Accessibility help
Internet Explorer 11 is being discontinued by Microsoft in August 2021. If you have difficulties viewing the site on Internet Explorer 11 we recommend using a different browser such as Microsoft Edge, Google Chrome, Apple Safari or Mozilla Firefox.
Open global navigation
Cambridge University Press
Home
> Subjects
> The Physics of Energy

The Physics of Energy 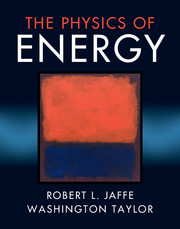 The Physics of Energy provides a comprehensive and systematic introduction to the scientific principles governing energy sources, uses, and systems. This definitive textbook traces the flow of energy from sources such as solar power, nuclear power, wind power, water power, and fossil fuels through its transformation in devices such as heat engines and electrical generators, to its uses including transportation, heating, cooling, and other applications. The flow of energy through the Earth's atmosphere and oceans, and systems issues including storage,…