Skip to main content Accessibility help
Internet Explorer 11 is being discontinued by Microsoft in August 2021. If you have difficulties viewing the site on Internet Explorer 11 we recommend using a different browser such as Microsoft Edge, Google Chrome, Apple Safari or Mozilla Firefox.
Open global navigation
Cambridge University Press
Home
> Subjects
> The Science of Learning and Development in Education

The Science of Learning and Development in Education

A Research-based Approach to Educational Practice 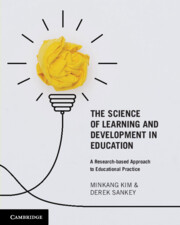 All teachers need to know how children and adolescents learn and develop. Traditionally, this knowledge had been informed by a mix of speculative and scientific theory. However, in the past three decades there has been substantial growth in new scientific knowledge about how we learn. The Science of Learning and Development in Education provides an exciting and comprehensive introduction to this field. This innovative text introduces readers to brain science and the science of complex systems as it applies to…