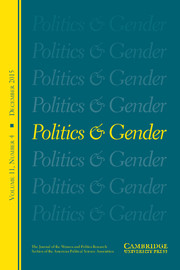 Thematic Issue on Gender and the Executive Branch

Critical Perspectives on Gender and Politics