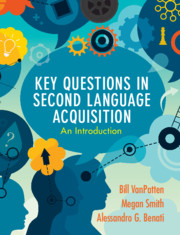 This highly accessible introductory textbook carefully explores the main issues that have driven the field of second language acquisition research. Intended for students with little or no background in linguistics or psycholinguistics, it explains important linguistic concepts, and how and why they are relevant to second language acquisition. Topics are presented via a 'key questions' structure that enables the reader to understand how these questions have motivated research in the field, and the problems to which researchers are seeking solutions.…