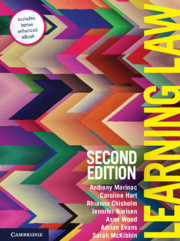 Learning Law is an accessible and engaging introduction to Australian law for students considering a career in the legal profession. This text teaches students how to deal with legislation and cases, focusing on core topics and contextualisation. This second edition has been thoroughly updated and revised, with significant changes including: six new chapters – First Peoples and the law, research, the ethical lawyer, statutory interpretation, lawyers and clients, becoming a lawyer – more coverage of parliaments and courts, new Living…