Skip to main content Accessibility help
Internet Explorer 11 is being discontinued by Microsoft in August 2021. If you have difficulties viewing the site on Internet Explorer 11 we recommend using a different browser such as Microsoft Edge, Google Chrome, Apple Safari or Mozilla Firefox.
Open global navigation
Cambridge University Press
Home
> Subjects
> The Cambridge History of Warfare 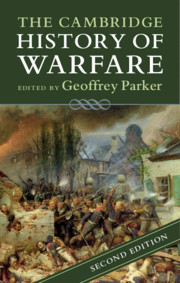 The new edition of The Cambridge History of Warfare, written and updated by a team of eight distinguished military historians, examines how war was waged by Western powers across a sweeping timeframe beginning with classical Greece and Rome, moving through the Middle Ages and the early modern period, down to the wars of the twenty-first century in Afghanistan, Iraq, and Syria. The book stresses five essential aspects of the Western way of war: a combination of technology, discipline, and an…