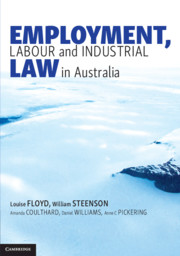 Employment, Labour and Industrial Law in Australia provides a comprehensive, current and accessible resource for the undergraduate and Juris Doctor student. With a social and political background to the law, this text provides insightful legal analysis underscored by practical business experience, while exploring key principles through a close evaluation of laws and lively discussion of prominent cases. Recognising the multi-faceted nature of the subject, the authors have included content on employment, labour and industrial law in the one text, while…