Home
The ABC of the OPT

The ABC of the OPT 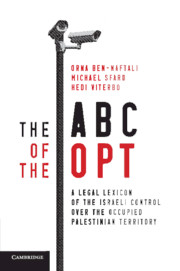 Israel's half-a-century long rule over the West Bank and Gaza Strip, and some of its surrounding legal issues, have been the subject of extensive academic literature. Yet, to date, there has been no comprehensive, theoretically-informed, and empirically-based academic study of the role of various legal mechanisms, norms, and concepts in shaping, legitimizing, and responding to the Israeli control regime. This book seeks to fill this gap, while shedding new light on the subject. Through the format of an A-Z legal lexicon, it critically reflects on, challenges, and redefines the language, knowledge, and practices surrounding the Israeli control regime. Taken together, the entries illuminate the relation between global and local forces - legal, political, and cultural - in Israel and Palestine. The study of the terms involved provides insights that are relevant to other situations elsewhere in the world, particularly with regard to belligerent occupation, the law's role in relation to state violence, and justice.

'A landmark in the literature of the Israel/Palestine conflict, this book’s comprehensive analysis of dozens of Israeli policies in the Occupied Territories demonstrates - brilliantly - that Israel systematically perverts the rule of law while all the time falsely proclaiming a meticulous commitment to legality. Truly eye-opening.'

'The ingenious format of the lexicon allows the three authors to offer a fresh account of the law of occupation. Starting from the insight that law is language is power, Orna Ben-Naftali, Michael Sfard and Hedi Viterbo furnish legal analysis on a high technical level and raise profound questions of justice. The original combination of keywords covering conventional legal terms (such as Geneva law) and unexpected words (such as outside/inside or kinship) creates a dense web of knowledge and makes the work a reliable source of information, provided by legal experts. Numerous cross-references help the reader to navigate the book and to find answers to specific questions. At the same time, this book instills a subtle horror about one of the most legalized regimes of territorial control in the world. A deeply passionate work of legal scholarship at its best.'

'Spiraling down the inverse hurricane of the endlessly temporary occupation, where facts are optional and state lawyers weaponize the law against the oppressed, we urgently need a new set of conceptual and practical tools. Now three of the most committed and brilliant legal scholars-practitioners working on or against the Israeli occupation have joined up to provide a uniquely perceptive and comprehensive analysis of law’s relationship with the Israeli control regime. This equips us with an essential cartography, charted from the very epicenter of the storm.'

Eyal Weizman - Director of the Centre for Research Architecture at Goldsmiths College, University of London

'This reference book is an indispensable guide to the Palestinian-Israeli problem and deserves a place in any public library as well as in research institutions. Essential.'

'The ABC of the OPT is an outstanding work on international law that addresses - dispassionately, authoritatively and comprehensively … Israel’s interminable occupation of Palestine. This … is truly a singular intellectual and academic achievement … This book is now the definitive go-to handbook - the indispensable guide - on international human rights and humanitarian law as it applies to occupied Palestine. It is substantive, definitive and utterly persuasive. … How rare it is for lawyers to write with such literary imagination and panache.'

Michael Lynk - Associate Professor of Law, Western University in London, Ontario, Canada, and UN Special Rapporteur for the Situation of Human Rights in the Palestinian Territory Occupied since 1967

'The ABC of the OPT is appealing to browse and easy to read … Comprehensive, incisive, and detailed … Although the stated audience of the book is legal scholars and practitioners familiar with the Israeli military occupation, the discussions are accessible to a broader audience. The authors suggest a tremendous number of valuable sources rich in detail on issues beyond the scope of the book, and even discussions that range beyond the Israel/Palestine context … With clear, careful, and precise legal language, the authors have managed to capture the key legal issues of the OPT … This book, a novel and successful attempt to scrutinize the legal challenge that threatens the very existence of Palestinians on their own land, is an important contribution to the legal literature on Palestine/Israel.'

'The ABC of the OPT, the award-winning new publication by three outstanding Israeli scholars and jurists - Orna Ben-Naftali, Michael Sfard and Hedi Viterbo - demonstrates, in a masterly fashion, the use and abuse of the laws of belligerent occupation as a masquerade for raw power and as a tool for oppression. The authors illustrate, using the format of a legal lexicon dedicated to specific legal terms and rhetorical devices (or newspeak), how the distorted application of the laws of belligerent occupation by Israeli lawyers and judges has conferred an aura of decency and legitimacy upon the long and open-ended occupation of the West Bank. This approach draws its intellectual roots from classic insights of critical legal studies - e.g., that law is chronically malleable to abuse and that law constitutes politics through other means.'

'In The ABC of the OPT: A Legal Lexicon of the Israeli Control over the Occupied Palestinian Territory, Orna Ben-Naftali, Michael Sfard and Hedi Viterbo provide a dense and detailed analysis of … [Israel's] heavily legalized control regime … The sheer volume of material covered … renders [this book] … as extensive as a single text could hope to be … The core threads of analysis running through the book converge to demonstrate how law has played a significant role in the making and maintaining of the reality of this occupation … The book shows that law is not merely used instrumentally in service of power; it is itself a form of power.'

'In The ABC of the OPT, Orna Ben-Naftali, Michael Sfard and Hedi Viterbo offer a guidebook for the legal tourist - a narrated cartography to the strange legal planet that has become Israel/Palestine … Fleshing out the concepts, doctrines and toolkits of rule that make up the legal terrain of the world’s longest remaining occupation, the format of the lexicon revives the colonial and imperial phantoms that have created international law, and how those legacies are used today by the Israeli state against the Palestinian population in the occupied territories and beyond. Since one of the most powerful tools of colonial rule has been the creation of colonial knowledge, and the transformation of the world of the subjects through administrative, economic and physical means of violence, … the use of the lexicon seeks to cut through the colonial political grammar of the occupation.'