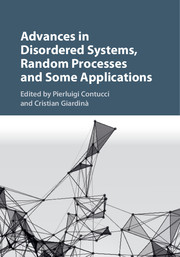 Advances in Disordered Systems, Random Processes and Some Applications
Buy print or eBook[Opens in a new window]

It has become increasingly obvious that very detailed, intricate interactions and interdependencies among and within large systems are often central to most of the important problems that science and society face. Distributed information technologies, neuroscience and genomics are just a few examples of rapidly emerging areas where very complex large-scale system interactions are viewed more and more as central to understanding, as well as to practical advances. Decision makers in these environments increasingly use computer models, simulation and data access resources to try to integrate and make sense of information and courses of action. There is also mounting concern that, in spite of the extended use of these simulations and models, we are repeatedly experiencing unexpected cascading systemic failures in society. We feel that, without resolving the issue of learning how to cope with complex situations, we also do not know enough about our methods of modeling complex systems to make effective decisions.

In the late eighties Saunders Mac Lane started a philosophical debate which, over thirty years later, is still going on with varying interest in the outcomes. This paper stems partly out of the crucial fundamental question that debate gave life to in contemporary science. This deep long-standing philosophical question, that can be formulated in several different ways, concerns mathematics. Are the formalisms of mathematics based on or derived from the facts and, if not, how are they derived? Alternatively, if mathematics is a purely formal game – an elaborate and tightly connected network of formal structures, axiom systems and connections – why do the formal conclusions in most of the cases fit the facts? Or, is mathematics invented or discovered? In the language of Karl Popper, statements of a science should be falsifiable by factual data; those of mathematics are not. Thus mathematics is not a science, it is something else. Yet the mathematical network is tied to numberless sources in human activities, to crucial parts of human knowledge and, most especially, to the various sciences.