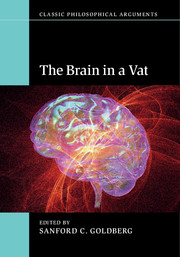 9 - Brains in vats and model theory

Hilary Putnam's anti-skeptical BIV argument first occurred to him when “thinking about a theorem in modern logic, the ‘Skolem–Löwenheim Theorem’” (Putnam 1981b: 7). One of my aims in this chapter – following Putnam, Thomas Tymoczko, and Adrian Moore – is to explore the connection between the argument and the Theorem. But I also want to show that Putnam's BIV argument provides us with an impressively versatile template for dealing with skeptical challenges.

The template I have in mind was most clearly set out in a remarkable – and remarkably brief – passage:

Suppose we (and all other sentient beings) are and always were ‘brains in a vat’. Then how does it come about that our word ‘vat’ refers to noumenal vats and not to vats in the image? (Putnam 1977: 487, original italics)

Two points leap out from this passage. First, the intended refutation of skepticism turns on semantic considerations. Second, the refutation involves an accusation of self-refutation: if the skeptical scenario actually obtained, then the skeptic would be unable to formulate her skeptical scenario. These two points allow us to unify some of Putnam's most enduring contributions to the realism/antirealism debate: his discussions of brains-in-vats, of Skolem's Paradox, and of permutations.

After considering some general questions about our engagement with skepticism (Section 9.1), I shall present and defend my favorite version of Putnam's BIV argument (Section 9.2). My aim is not to offer a complete defense of the argument, but to highlight its working parts, and also to explain why the argument is significant. The key point is that, having answered the BIV skeptic, we must jettison any philosophical picture which treats BIV skepticism as unanswerable.

I then apply the same considerations against two further varieties of skepticism. In particular, I first show how to answer skolemism (Section 9.3), and then show how to answer the kinds of semantic skepticism that arise during Putnam's model-theoretic arguments (Section 9.4). In all three cases, the anti-skeptical argument does not merely defeat the skeptic; it also shows us that we must reject some prima facie plausible philosophical picture.

Why to engage with skepticism, and how

If a skeptic is any good, then she will present us with an unanswerable challenge. One might reasonably wonder, then, why we should even bother to engage with skepticism.