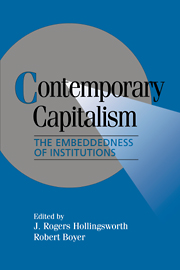 Chapter 6 - Beneficial Constraints: On the Economic Limits of Rational Voluntarism

Economists have succeeded in persuading most people that the performance of an economy improves as social constraints on self-interested rational action are removed. In this essay I wish to argue that, to the contrary, socially institutionalized constraints on the rational voluntarism of interest-maximizing behavior may be economically beneficial, and that systematic recognition of this must have far-reaching implications for both economic theory and the conduct of economic policy.

Note that I am referring not to social but to economic benefits of social constraints, and to constraint rather than choice. In other words, I am not discussing whether or not societies may or should impose constraints on economic behavior for moral reasons; even most economists agree that people should not be allowed to sell and buy babies, regardless of whether this was the free will and perceived rational interest of all parties involved. And I am arguing for the economic benevolence not of individual freedom, but of limitations on individual volition and the pursuit of self-interest. To support high economic performance, I am claiming, a society requires a capacity to prevent advantage-maximizing rational individuals from doing things that they would prefer to do, or to force them to do things that they would prefer not to do.

The suggestion that social institutions constraining the rational voluntarist pursuit of economic advantage, and thereby interfering with the spread and operation of markets, may be economically beneficial directly contests the leading premises of mainstream economics with its laissez-faire conceptual heritage, and strikes right into the heart of darkness of liberal individualism.