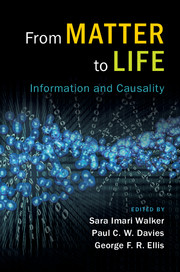 14 - Automata and Animats: From Dynamics to Cause–Effect Structures

from Part IV - Complexity and Causality

The term “dynamical system” encompasses a vast class of objects and phenomena – any system whose state evolves deterministically with time over a state space according to a fixed rule (Nykamp, 2015). Since living systems must necessarily change their state over time, it is not surprising that many attempts have been made to model a wide range of living systems as dynamical systems (de Jong, 2002; Ermentrout and Edelstein-Keshet, 1993; Izhikevich, 2007; Kaneko, 2006; Nowak, 2006; Sumpter, 2006), although identifying an accurate time-evolution rule and estimating the relevant state variables can be hard. On the other hand, even simple state-update rules can give rise to complex spatio-temporal patterns, reminiscent of certain features associated with living systems, such as complex behavioral patterns, self-organizing behavior, and self-reproduction. This has been demonstrated extensively using a class of simple, discrete dynamical systems called “cellular automata” (CA) (Gardner, 1970; Knoester et al., 2014; von Neumann, 1966; Wolfram, 1984, 2002). CA consist of a lattice of identical cells with a finite set of states. All cells evolve in parallel according to the same local update rule, which takes the states of their neighboring cells into account (Figure 14.1).

In any dynamical system, the time-evolution rule determines the future trajectory of the system in its state space given a particular initial state. The aim of dynamical systems theory is to understand and characterize a system based on its long-termbehavior, by classifying the geometry of its long-term trajectories. In this spirit, CA have been classified according to whether their evolution for most initial states leads to fixed points, periodic cycles, or chaotic patterns associated with strange attractors (Li and Packard, 1990; Wolfram, 1984) (Figure 14.1B). Despite the simplicity of the rules, this classification is undecidable for many CA with infinite or very large numbers of cells (Culik and Yu, 1988; Sutner, 1995). This is because determining the trajectory of future states is often computationally irreducible (Wolfram, 1985), meaning that it is impossible to predict the CA's long-term behavior in a more computationally efficient way than by actually evolving the system.