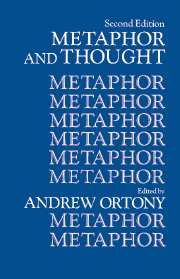 21 - Metaphor and theory change: What is “metaphor” a metaphor for?

In the now classic essay “Metaphor” (Black, 1962b), Max Black considers and rejects various formulations of the “substitution view” of metaphor, according to which every metaphorical statement is equivalent to a (perhaps more awkward, or less decorative) literal statement. Black devotes most of his critical attention to a special case of the substitution view, the “comparison view,” according to which a metaphor consists in the presentation of an underlying analogy or similarity. It is clear from Black's discussion that he understands the comparison view as entailing that every metaphorical statement be equivalent to one in which some quite definite respect of similarity or analogy is presented, and that successful communication via metaphor involves the hearer understanding the same respect(s) of similarity or analogy as the speaker.

Black argues that, except perhaps in cases of catachresis – the use of metaphor to remedy gaps in vocabulary – the comparison view is inadequate. As an alternative, Black proposed the adoption of an “interaction view” of metaphor. According to this view, metaphors work by applying to the principal (literal) subject of the metaphor a system of “associated implications” characteristic of the metaphorical secondary subject. These implications are typically provided by the received “commonplaces” about the secondary subject. Although Black's position has many facets, it is clear that, at a minimum, it differs from the comparison view in denying that the success of a metaphor rests on its success in conveying to the listener or reader some quite definite respects of similarity or analogy between the principal and secondary subjects: metaphors are, on Black's view, more open-ended (this is not his terminology) than the comparison view would suggest.