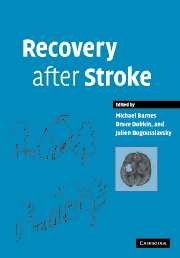 18 - Aphasia and dysarthria after stroke

Disorders of communication following stroke are not uncommon. When the stroke affects the region of the left hemisphere known as the language zone, the chances of having a problem with language and/or speech are quite high in most right-handed individuals. Recovery from these disorders of language and speech is variable across individuals and dependent upon a number of factors, many of which are still unknown.

In this chapter, the common aphasia syndromes and stroke-caused dysarthria syndromes are reviewed with respect to lesion localization. This section is followed by a longer discussion of recovery that includes information on natural recovery patterns, recent trends in speech–language therapy and pharmacological treatments for aphasia, and mechanisms of recovery suggested by results of recent neuroimaging studies.

Aphasia is defined as a disorder of language caused by acquired brain damage. People with aphasia may have problems with a variety of activities that require linguistic knowledge or processing of language, such as understanding spoken language, formulating their own spoken messages, retrieving specific words, understanding written text, and writing. The incidence of aphasia after a stroke is estimated to be somewhere between 20 and 40%. Pedersen and colleagues (1995) found that the incidence of aphasia in a prospective study of over 800 acute stroke patients was 38%. After six months, approximately half of the surviving patients who initially had aphasia were still aphasic. Similar results were found by Laska and colleagues (2001), who suggested that aphasia in acute stroke was associated with higher mortality in a cohort of unselected stroke patients. The incidence of aphasia in left hemisphere stroke is, of course, much higher than in all cases of stroke, and estimated to be over 50%. For example, Scarpa et al. (1987) found that 55% of patients with left hemisphere stroke still had aphasiawhen examined between 15 and 30 days post-onset. Patients with stroke affecting the right hemisphere may have communication difficulties such as dysprosody, dysarthria, or higher-level disorders of communication pragmatics, but aphasias are rare from right hemisphere stroke. In fact, aphasia resulting from a right hemisphere stroke in a right-handed individual is such a rare syndrome that it has its own name: crossed aphasia.