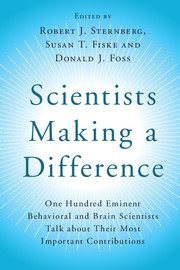 from Section A - Social Cognition

In the course of our daily lives, we make tons of decisions ranging from the relatively trivial to the more consequential. What should I wear to work? What soap should I buy? For whom should I vote in the Presidential election? The work that my colleagues and I have done over the past several decades has tried to address how people go about evaluating their options and deciding what to do. Our goal has been to build a general model of attitude formation and change that can be applied to virtually any situation in which a person must make a decision or decide on a course of action. As social psychologists, our focus has largely been on how people's own views are influenced by the information provided to them by other people, but we have also studied self-influence.

Although I was very interested in persuasion as a teen – mostly because of the practical benefits of the rare win in arguments with my father – I first became interested in social influence as an academic topic as an undergraduate Political Science major at the University of Virginia. I was intrigued by Richard Neustadt's dictum that the power of the president was merely the power to persuade. Yet, little evidence was available to indicate how voters made their decisions and what factors determined whether citizens were drawn to one side over another. As luck would have it, a social psychologist was offering a small advanced seminar on political psychology that I was allowed to join despite not being a psych major. The course proved so fascinating and relevant to my interests that I vowed to forgo my original law school plans and become a social psychologist instead.

When I arrived in Columbus to enter the social psychology PhD program at Ohio State University, I wasn't entirely sure what to expect. However, as luck would have it once again, I began a friendship and ultimately long-term scientific collaboration with another student entering the program at the same time, John Cacioppo. Ohio State was the perfect place for us to do our individual and collaborative work because of the stellar resources and atmosphere.