Home
After the Berlin Wall

After the Berlin Wall

Memory and the Making of the New Germany, 1989 to the Present 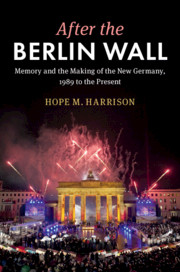 The history and meaning of the Berlin Wall remain controversial, even three decades after its fall. Drawing on an extensive range of archival sources and interviews, this book profiles key memory activists who have fought to commemorate the history of the Berlin Wall and examines their role in the creation of a new German national narrative. With victims, perpetrators and heroes, the Berlin Wall has joined the Holocaust as an essential part of German collective memory. Key Wall anniversaries have become signposts marking German views of the past, its relevance to the present, and the complicated project of defining German national identity. Considering multiple German approaches to remembering the Wall via memorials, trials, public ceremonies, films, and music, this revelatory work also traces how global memory of the Wall has impacted German memory policy. It depicts the power and fragility of state-backed memory projects, and the potential of such projects to reconcile or divide.

'An original mixture of journalistic reporting and scholarly analysis, this will be the definitive work on the subject of the aftermath of the Wall.'

Konrad H. Jarausch - University of North Carolina Chapel Hill and author of Out of Ashes: A New History of Europe in the Twentieth Century

'Hope M. Harrison’s superbly informed and often moving study of the Berlin Wall demonstrates that the issues of whom to honor and punish, how to memorialize, and how to integrate into the history of German dictatorship, have made its history a continuing site of political contestation. And poignantly today, a reminder of the era when we strove to tear down walls and not to build them.'

Charles S. Maier - Harvard University and author of Dissolution: The Crisis of Communism and the End of East Germany

'Hope M. Harrison provides an extraordinary account of an extraordinary event and its legacies, both factual and political, and it will certainly frame the discussion for the future. It is a tremendous achievement.'

'A riveting and compelling account of Germany’s post-1989 struggle over the history and memory of the Berlin Wall. Masterfully told with critical distance and yet deep empathy, Harrison engages the reader in the dramatic contest over the past and future of the new Germany.'

'A tour de force, breaking new ground in showing us how German memory activists turned the focus of national history to the Cold War, and in particular to the wall, the dismantling of which embodied the peaceful end of that struggle for freedom.'

'… many years in the making and is the result of meticulous research.'

‘This important book offers a comprehensive account of how the Berlin Wall has been remembered and memorialized since its fall in 1989 … this clearly written and highly readable text will appeal to scholars and general readers alike.’

‘… far-ranging, well-researched and highly readable study … After the Berlin Wall is a major achievement by a leading scholar, a study that will, for the foreseeable future, set the standard for any serious exploration of unified Germany’s memory culture surrounding the Berlin Wall.’

‘… the book adds to our understanding of the Wall as a touchstone and sounding board for memory. Harrison succeeds in bringing out the palimpsest qualities of this stark, spray-painted structure.’

‘Hope M. Harrison’s splendid book is a tremendous achievement … It will frame the memory and identity discussions for the future.’