Home
The Army and Politics in Zimbabwe

The Army and Politics in Zimbabwe

Mujuru, the Liberation Fighter and Kingmaker 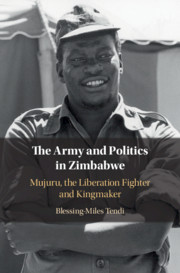 An illustrious African liberation fighter in the 1970s and, until his suspicious death in 2011, an important figure in Robert Mugabe's ruling ZANU PF party in Zimbabwe, this first full-length biography of General Solomon Mujuru or Rex Nhongo throws much needed light onto the opaque elite politics of the 1970s liberation struggle, post-independence army and ZANU PF. Based on the unparalleled primary interviews with informants in the army, intelligence services, police and ZANU PF elites, Blessing-Miles Tendi examines Mujuru's moments of triumph and his shortcomings in equal measure. From his undistinguished youth and poor upbringing in colonial Rhodesia's Chikomba region, his rapid rise to power, and role as the first black commander of independent Zimbabwe's national army, this is an essential record of one of the most controversial figures within the history of African liberation politics.

'This is the book everyone interested in Zimbabwean political history has been waiting for. Its biographical lens provides unique new insight into the ruling party and military. Moving from Mugabe’s rise to power in Mozambique, through the ceasefire, army integration and persecution of ZIPRA cadres in the early 1980s, to the bitter succession struggle of the 2000s, it reveals the workings of the deep state against Mugabe’s adversaries.'

'Tendi’s General Solomon Mujuru is an energetic, believable, Zimbabwean freedom fighter, post-independence politician, and eventual antagonist of President Robert Mugabe’s despotism. Tendi’s enthralling biography encapsulates the entire modern political evolution of a desperate country where even heroes are in the end destroyed by their fearful rivals.'

'In telling Mujuru’s story, Tendi delivers a ground-breaking contribution to our understanding of Zimbabwean politics, but also sets a benchmark for the utility of biography in writing African politics.'

'This erudite, well-argued and elegantly presented book confirms Tendi’s position as one of the leading scholars in contemporary Zimbabwean and indeed Southern African historical and political studies. What is offered here is an academic masterpiece on the opaque life and legacy of General Solomon Mujuru, drawing from a meticulous combination of biography and oral history as both method and source.'

‘Tendi’s biography of Rex Nhongo/Solomon Mujuru is a tour de force … Tendi’s careful attention to detail is matched by his deft hand at synthesizing and interpreting his material … Tendi has set a high standard for others seeking to write history through biography, but his success will surely inspire more to follow his example.’

‘... this book is a major achievement. Tendi’s study will be of great interest to scholars and students of Zimbabwean politics, security studies, civil-military relations, post-civil war military integration and the liberation wars of Southern Africa more generally.’