Race, Freedom, and Law in Cuba, Virginia, and Louisiana 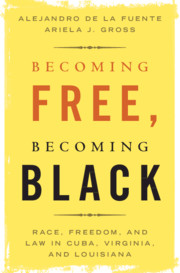 'At a moment when ‘Send Them Back’ has reemerged as a nativist rallying cry, Becoming Free, Becoming Black is a brilliantly lucid guide to the deep history of how race and ethnic origin came to be potent ciphers for civic belonging. … De la Fuente and Gross show that brutality lay not merely in the imposition of slavery, but in the creation of racial regimes ranking black bodies even once freed from bondage. If enslavement is construed as an external political constraint, the project of freedom becomes focused on unshackling bodies from those confines. But if white means free and black means slave, then political status is embodied, innate and inescapable. … To this day, the legacy of free-but-not-full-citizen delimits quietly powerful hierarchies in our varying capacities to travel, vote, mix socially, run a business, hold public office, and intermarry. This indispensable book shows how knowing the past might aid us to intelligently reform our future.'

'In this incisive and spell-binding study, Alejandro de la Fuente and Ariela Gross meticulously investigate the archives of the ‘legal regimes of slavery and race’ in the culturally disparate locations of Cuba, Louisiana, and Virginia, thus exposing the differences and similarities between Spanish, French, and English approaches to manumission and interracial relationships. In addition, the authors brilliantly focus on the bottom up efforts of the enslaved to gain freedom, thus exposing how these ‘unpredictable twists and turns’ established the meaning of blackness in law. Not only an important legal analysis, Becoming Free, Becoming Black tells many fascinating stories of heroic efforts to attain freedom through legal regimes.'

'Becoming Free, Becoming Black is a brilliant study of the making of race in the New World. Deeply researched, insightful, and smoothly written, this book is a major contribution to the scholarly literature on slavery and the way it shaped, and was shaped by, attitudes about people of African descent.'

'In Cuba of 1860, many persons of color who purchased their freedom lived alongside slaves; while In Louisiana and Virginia free people of color had almost disappeared, and to be black was to be enslaved. The difference was in the law and custom regulating freedom - law made by many hands, including those of slaves themselves. This book, based on meticulous archival research and brilliantly reasoned and written, is comparative legal history at its finest.'

'To what can we attribute the distinct racial ideologies that emerged in different slaveholding societies in the Americas? In this rich and innovative comparative study, Ariela Gross and Alejandro de la Fuente emphasize the role of the emergence of communities of free persons of African descent, and their evolution over time. Although elites in all three societies sought to attach sharp social distinctions to color, the authors find that ‘the association between blackness and enslavement, whiteness and freedom, remained less strict and precise in Cuba than in Virginia and Louisiana.’ As slavery itself was abolished, these prior differences laid the groundwork for divergent experiences of access to the rights of citizenship. This is a provocative and important book.'

'Becoming Free, Becoming Black provides crucial insights into the ways that conceptions of race and power varied across the Americas in the era when slavery was at its most widespread. It is a valuable window on the ways that the system maintained itself, and on the resistance that, although often unsuccessful, showed the persistence of the will to resist under even the most horrendous conditions.'

‘… this book contributes greatly to a comparative understanding of the African diaspora and the complexities of both colonial experiences and post-emancipation societies.’

‘Becoming Free, Becoming Black is a beautifully written manuscript based on both archival research and extensive bibliographic discussion.’

‘De la Fuente and Gross have provided a useful handbook for historians of all three regions who seek to understand the law's effect on regimes of racial exploitation – and the worlds that people of color constructed through and under it.’