Home
Calvin's Political Theology and the Public Engagement of the Church

Calvin's Political Theology and the Public Engagement of the Church 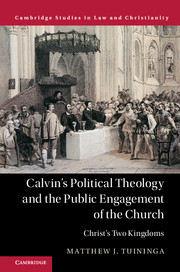 In Calvin's Political Theology and the Public Engagement of the Church, Matthew J. Tuininga explores a little appreciated dimension of John Calvin's political thought, his two kingdoms theology, as a model for constructive Christian participation in liberal society. Widely misunderstood as a proto-political culture warrior, due in part to his often misinterpreted role in controversies over predestination and the heretic Servetus, Calvin articulated a thoughtful approach to public life rooted in his understanding of the gospel and its teaching concerning the kingdom of God. He staked his ministry in Geneva on his commitment to keeping the church distinct from the state, abandoning simplistic approaches that placed one above the other, while rejecting the temptations of sectarianism or separatism. This revealing analysis of Calvin's vision offers timely guidance for Christians seeking a mode of faithful, respectful public engagement in democratic, pluralistic communities today.

'… a superb piece of work, an important contribution and lucidly written. My guess is that this will become the gold standard in the field. Tuininga’s line of interpretation will be much discussed.'

'This is an outstanding piece of intellectual-historical scholarship. It will appeal to historians of medieval and early modern political thought regardless of their personal faith or political commitments.'

'Lionized as a founder of modern liberalism and demonized as ‘the tyrant of Geneva,’ Calvin has been used more than understood. Placing the reformer in his own context, Tuininga exegetes primary sources while challenging anachronistic stereotypes. In the process, we meet a complex figure who offers important and relevant insights for Christian political reflection, even in - perhaps ironically, especially in - a secular age very different from his own.'

'Tuininga’s account of Calvin’s thought is original, lucid, well-informed, and timely. It is based on a firm grasp of the primary materials, a comprehensive familiarity with the relevant scholarship, and a challenging interpretation of Calvin’s political theology with important contemporary relevance.'

'Tuininga’s thoughtful and cogent examination of Calvin’s two kingdom doctrine turns on one of the perceptive distinctions which make the reformer’s thought such a complex yet coherent expression of Biblical commitment joined with practical intelligence. Tuininga appropriately points to the often neglected eschatological dimension of Calvin’s thought to ground the way the reformer clearly distinguishes ecclesiastical and civil while also clearly affirming that Christ is Lord of both - ruling each in specific and distinct ways. The study focuses on the development of the teaching in its historical and religious context, providing a well-organized exposition of the interplay of scriptural exegesis with Calvin’s affirmation of the gift of natural law in the human realm. Tuininga then draws some very timely conclusions about the resources Calvin’s theology can offer for faithful Christian engagement in the modern pluralist world.'

'Tuininga’s book is exemplary and informative not only for its rich display of Calvin’s own thought but also for its serious engagement with the most important political theologians of our own day.   His painstaking examination of Calvin exposes many longstanding generalizations and replaces them with a Calvin who is at once more nuanced, more contextualized, and even more compatible with political liberalism than usually supposed - a Calvin who displays remarkable currency for us today, especially when we see the poignancy and depth of Calvin’s concern for refugees and the poor.'

'Tuininga provides a clear and thorough account of John Calvin’s doctrine of the two kingdoms, a topic much in need of such a study. The author’s careful reading of Calvin’s texts and thoughtful consideration of his context makes this a landmark work amidst the ample literature on the Genevan Reformer’s political thought. As much as this book contributes to our understanding of Calvin as a historical figure, however, its most important contribution may be its argument that Calvin’s two-kingdoms doctrine provides theological reason for contemporary Christians to support liberal democracy, at a time when many inside and outside the church question its viability. Christians who wish to think deeply about their political identity and responsibilities will find this a richly rewarding work.'

'Tuininga’s contribution offers a cogent and thoughtful extension of the discussion on Calvin’s political theology, and it should be required reading for anyone working in the field.'

‘Tuininga has written a highly interesting and rich book that serves not only the academic world, and the field of Calvin research in particular, but also the present-day concern about what political attitude Christians can and even should have in a changing Western world. Thus, in his conclusion, Tuininga shares with the reader his conviction that 'Calvin’s two kingdoms theology offers us good reason to embrace political liberalism and helpful guidance for what our participation in its practices and institutions might look like'. After all that Tuininga has quoted from Calvin this conviction comes as no surprise, but it is also well grounded.’

'It takes a particular skill to grasp the complexity of Calvin’s ideas, another to present them intelligibly, and another to argue convincingly for their relevance today. That the author possesses all three has enabled him to produce a quite remarkable book, one which should set a new marker for Calvin studies and prompt a fresh evaluation of his contribution to Christian political thought.'

'… this study is an incredibly insightful work that pushes Calvin studies in new directions … This is a truly useful book that represents what Calvin studies are supposed to be and should have been for the last ten years.'