A Case for Shareholders' Fiduciary Duties in Common Law Asia 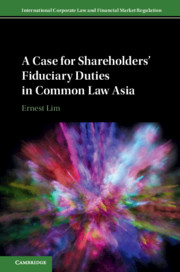 This book reconceptualises the role of the general meeting and shareholders in the listed companies in four leading common law jurisdictions in Asia (Singapore, Hong Kong, India and Malaysia) as one that should include fiduciary duties. It demonstrates why, when, by whom and how fiduciary duties should be imposed and how they could be enforced. In so doing, it refutes the long-standing common law rule that shareholders can generally vote as they please. The book advances the debate on a central notion of corporate law, namely, the interests of the company. It addresses the deficiencies in the law regulating conflicts of interest involving controlling shareholders and institutional shareholders and provides solutions to the problem of activist and passive minority institutional investors. This book challenges us to rethink the meaning and implementation of the long-term success of the company and shows how corporate governance should and could be made.

'Professor Lim’s book is an impressive contribution to an important corporate governance debate regarding the role of shareholders. By combining excellent doctrinal, empirical and policy-focused research, he argues for a reconceptualisation of the role of shareholders in listed companies, including the imposition of fiduciary duties on these shareholders. The book primarily focuses on listed companies in Hong Kong, Singapore, India and Malaysia but is undoubtedly of broad international significance. Many will benefit from reading this insightful and thought-provoking book.'

'This book makes a trenchant and compelling case for imposing legal responsibility on corporate shareholders in the four Asian common law jurisdictions, drawing assuredly on jurisprudence, doctrine, best practice and actual practice. With insight, skill and erudition, the author makes the strongest case yet for root-and-branch revision of the Anglo-Saxon approach to the rights and duties of corporate participants. This is essential reading for anyone seriously interested in corporate governance, whether in common law Asia or anywhere in the world.'

'Controlling shareholders are the norm for most of the world's companies. There are a wide range of mechanisms by which such controllers can influence corporate activities to their own benefit and to the detriment of minority shareholders. In this important book, Ernest Lim presents cogent arguments for a reassessment of the position in Asian company laws under which controllers are generally not subject to fiduciary duties. The author also makes a case for institutional shareholders to be subject to fiduciary duties because of conflicts of interest between them and the company. This book will challenge readers to rethink the function of corporate governance.'

John Armour - Hogan Lovells Professor of Law and Finance, University of Oxford and Fellow of the British Academy and European Corporate Governance Institute

'A central thesis of this impressive work is that a company's members in general meeting, as well as its board of directors, are agents of the company, and as such are subject to fiduciary obligations. This book will be valuable to those who research and advise on not only company law, corporate governance and Asian jurisdictions, but also equity and common law more generally.'

'This book makes a major contribution to contemporary debate about the role of shareholders (both institutional and controlling shareholders) and to comparative corporate governance generally. It reconceptualises shareholders and advances the 'provocative thesis' that, in common law Asia, shareholders should be subject to fiduciary duties. The book will be of interest to corporate law scholars and practitioners, and to anyone seeking to understand the growing legal and economic significance of East Asia.'

'The argument is multitextured and tightly knit. Along the way, Lim queries central assumptions that have underpinned company law in common law jurisdictions … Lim’s study is pioneering as the first work that critically examines the concept of the company interest, including the idea of imposing fiduciary duties on controlling shareholders, in common law Asia … The book bristles with ideas that will have application in other common law jurisdictions not just those in Asia. The book is a delight to read. I unreservedly recommend it.'