Sympathy for the Poor, Resentment of the Rich, and Political Implications 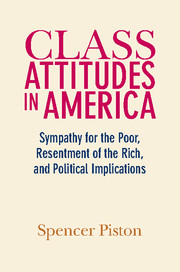 This book explains a long-standing puzzle in American politics: why so many Americans support downwardly redistributive social welfare programs, when such support seems to fly in the face of standard conceptions of the American public as anti-government, individualistic, and racially prejudiced. Bringing class attitudes into the analysis, Spencer Piston demonstrates through rigorous empirical analysis that sympathy for the poor and resentment of the rich explain American support for downwardly redistributive programs - not only those that benefit the middle class, but also those that explicitly target the poor. The book captures an important and neglected component of citizen attitudes toward a host of major public policies and candidate evaluations. It also explains why government does so little to combat economic inequality; in key instances, political elites downplay class considerations, deactivating sympathy for the poor and resentment of the rich.

'This powerful and important book shows that - despite their reputation - Americans want their government to do more to help the least well off. With new evidence and rigorous analysis, Piston shows that most Americans believe the poor have less than they deserve, the rich have more than they deserve, and the appearance of public opposition to progressive economic policies stems from a lack of understanding of who benefits not an opposition to downward redistribution.'

'To understand the persistence of wide economic disparities in American society, Spencer Piston’s important new book places ultimate responsibility on elite politics and discourse rather than mass public opinion. This is a vital addition to the growing literature on Americans’ political views of class and inequality rooted in rigorous empirical evidence rather than conventional (elite) wisdom on both sides of the political aisle.'

'Piston suggests that contrary to conventional wisdom, class attitudes are not only common among the American public but that these views play a substantial role in shaping political preferences. … when the public is asked to think about politics in their own words, they often do so in terms of class. … The book offers an important and compelling argument about how the public views the rich and the poor, which is bolstered by clear and precisely written prose. Piston introduces a novel perspective on U.S. class politics that I hope will shape how scholars think about social class, government redistribution, and economic inequality.'

'In a political moment when much of our collective wisdom about what people want from government and how government ought to respond to citizens is under question, Piston’s excellent book turns our attention to strong levels of support for redistributive public policies present in the electorate that come as a consequence of sympathy for the poor or resentment toward the rich.'

'The book should be read by all social science scholars seeking to understand how ‘class matters’ to American politics today. … The methodological pluralism of this work is one of its strengths, aiding the author in making a causal claim for how attitudes toward the rich and poor impact political preferences.'

'Piston’s research affirms a broader insight of contemporary political science: Most human beings view politics through the lens of group identity, not ideology … This theoretical framework helps explain why voters in the ANES surveys were less likely to complain about the GOP’s indifference to 'inequality', than about the party’s undue deference to the rich: Inequality is an ideological abstraction, ‘the rich’ is a widely resented social group.'