Engineering, Enterprise and Empire on the Nineteenth-Century Seas 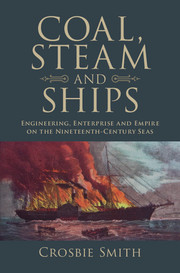 Crosbie Smith explores the trials and tribulations of first-generation Victorian mail steamship lines, their passengers, proprietors and the public. Eyewitness accounts show in rich detail how these enterprises engineered their ships, constructed empire-wide systems of steam navigation and won or lost public confidence in the process. Controlling recalcitrant elements within and around steamship systems, however, presented constant challenges to company managers as they attempted to build trust and confidence. Managers thus wrestled to control shipbuilding and marine engine-making, coal consumption, quality and supply, shipboard discipline, religious readings, relations with the Admiralty and government, anxious proprietors, and the media - especially following a disaster or accident. Emphasizing interconnections between maritime history, the history of engineering and Victorian culture, Smith's innovative history of early ocean steamships reveals the fraught uncertainties of Victorian life on the seas.

‘This wonderful book about early steamships provides an outstandingly authoritative historical account of the impact of engineering on nineteenth-century global economies. Full of fascinating human stories from the age of Brunel and Cunard to the transformations brought about by rapid connections between old and new worlds, Smith provides a fresh and important way to think about the role of technology in history.'

‘Steamships transformed world trade in the nineteenth century. Few know as well as Crosbie Smith the story of the businessmen, engineers, and sailors who built and ran the new global fleets of steamers that worked that transformation, and no one has told it with more penetrating insight. Coal, Steam and Ships is a remarkable contribution to the literature of Britain's seaborne empire.'

'Coal, Steam and Ships is a masterly analysis of the rich, complex and interconnected intellectual, organisational, technological and cultural processes that transformed the steamship from experimental novelties into the elegantly engineered prime movers of the global economy in fifty years.'

‘Coal, Steam and Ships tells a story with global significance by bringing together deep scholarship and sophisticated historical understanding. Crosbie Smith's mastery of his subject is formidable. The drama and the dangers of the voyages, the conflicts over finance and innovation, and the delicate relationships between interest groups are vividly evoked. A major achievement by one of the world's most admired historians of science and technology.'

'Coal, Steam and Ships is a rich and noteworthy examination of the early decades of regular global operations by steamships as exemplified by the development of five successful shipping companies.'

'Crosbie Smith’s latest book is the culmination of his long train of work on the subject of energy in the British culture … The index is as meticulous as the research; sixty-two pages of extensive cross-referencing ensure that the reader will never be lost.'