Home
The 'Conspiracy' of Free Trade

The 'Conspiracy' of Free Trade

The Anglo-American Struggle over Empire and Economic Globalisation, 1846–1896 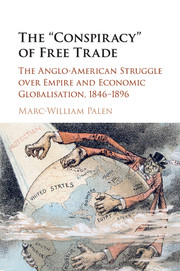 Following the Second World War, the United States would become the leading 'neoliberal' proponent of international trade liberalization. Yet for nearly a century before, American foreign trade policy was dominated by extreme economic nationalism. What brought about this pronounced ideological, political, and economic about-face? How did it affect Anglo-American imperialism? What were the repercussions for the global capitalist order? In answering these questions, The 'Conspiracy' of Free Trade offers the first detailed account of the controversial Anglo-American struggle over empire and economic globalization in the mid- to late-nineteenth century. The book reinterprets Anglo-American imperialism through the global interplay between Victorian free-trade cosmopolitanism and economic nationalism, uncovering how imperial expansion and economic integration were mired in political and ideological conflict. Beginning in the 1840s, this conspiratorial struggle over political economy would rip apart the Republican Party, reshape the Democratic Party, and redirect Anglo-American imperial expansion for decades to come.

‘In this boldly argued and richly detailed study, Marc-William Palen shows us why we should know much more than we do about the debate over the tariff in the nineteenth century. The 'Conspiracy' of Free Trade demonstrates how questions of tariffs and trade were ideologically charged and central to American conceptions of imperialism and global economic integration in the age of British power.’

‘In this illuminating study, Marc-William Palen cuts across the conventional domestic versus foreign approach to American history, showing the role of trade politics as an instrument of a resurgent and highly influential American economic nationalism in the late nineteenth century. He makes clear the eddying global effects of trans-Atlantic controversies over tariffs upon the shaping of US imperialism and Anglo-American relations.’

'In a US election year thick with controversy over the impact of free trade and globalisation on jobs and wages, Palen’s absorbing study of the nineteenth-century version of these debates is timely. The Exeter University historian contrasts the British commitment to free trade with what were the then dominant currents of US economic nationalism and protectionism.'

'The 'Conspiracy' of Free Trade … is a corrective to decades of historiography that laissez-faire doctrine guided the Gilded Age. On the contrary, Palen’s sophisticated look into Anglo-American dialogue and domestic political maneuverings show that 'ideological conflict between free traders and economic nationalists laid the imperial path for Anglo-American economic globalization' … His archival research is solid, though far surpassed by the extensive treatment of periodical and secondary sources; Palen has mined seemingly every commentary on the half century he covers.'

'Palen marshals considerable resources to challenge the Revisionist 'OpenDoor imperialism' thesis, and his work is deeply engaged with decades of secondary literature on trade policy and Anglo-American relations.'

'This is a fascinating story, and its one that Palen tells with admirable clarity and concision. Each of the nine main chapters deals with a different, and often quite diverse, subject, but the central organising theme of Cobdenite-Listian conflict remains always in focus.'

'This is an expansive and impressive achievement. For scholars of the Gilded Age and Progressive Era with interests in the political economy of empire, Palen's observations ought to be the new starting place.'

'Based on a voluminous and thorough use of primary and secondary sources, The 'Conspiracy' of Free Trade is an important work.'

'… provides a thorough chronological study of the positions and clashes between Cobdenites and Listians, is a precious resource for economic and imperial historians. … for anyone hoping to gain broader understanding of the globalisation debate this book deserves, at the very least, a careful read-through.'

'Palen’s study is serious, deeply researched and convincing. … This book will undoubtedly compel these scholars to re-examine such debates and reflect on how they might alter their own approaches to the study of the American Empire.'