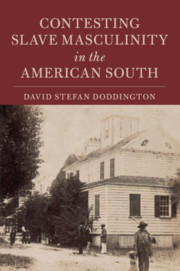 Contesting Slave Masculinity in the American South demonstrates the significance of internal divisions, comparison, and conflict in shaping gender and status in slave communities of the American South. David Stefan Doddington seeks to move beyond unilateral discussions of slave masculinity, and instead demonstrates how the repressions of slavery were both personal and political. Rather than automatically support one another against an emasculatory white society, Doddington explores how enslaved people negotiated identities in relation to one another, through comparisons between men and different forms of manhood held up for judgment. An examination of the framework in which enslaved people crafted identities demonstrates the fluidity of gender as a social and cultural phenomenon that defied monolithic models of black masculinity, solidarity, and victimization. Focusing on work, authority, honor, sex, leisure, and violence, this book is a full-length treatment of the idea of 'masculinity' among slave communities of the Old South.

'Doddington’s riveting portraits of rebels and resistors, conspirators and collaborators offer nuanced insight into American slavery, as well as refreshing intersectional analysis of race, gender and sexuality. This book provides a powerful portrait of a key era, introducing more complex interpretations of dominance, violence, exploitation and vivid sketches of 'performing manhood' and homosocial subcultures. Doddington’s emphasis on multiple hierarchies and competing community values is a welcome addition to this expanding field, enriching our understanding of struggles for those navigating the treacherous terrain of an antebellum slave South.'

'What did it mean to be both a man and also a slave? In this deeply researched, powerful and compelling account of how enslaved men established masculine identity in work, in family and sex, in having authority over other slaves, and in various forms of violence, Doddington convincingly demonstrates just how fluid the idea and reality of notions of manhood were among enslaved peoples in antebellum America. This book provides fascinating new perspectives on just about every area of American slavery through a sophisticated gender analysis.'

'David Stefan Doddington’s innovative book offers a bold challenge to the idea of a united slave community struggling against oppression. His argument, that enslaved men were perfectly capable of looking out for their own interests even to the detriment of other enslaved people, makes for a much more realistic portrait of the slave community as a result. This book is an important addition to the historiography of enslaved masculinity in the antebellum South.'

Tim Lockley - author of Welfare and Charity in the Antebellum South

'Contesting Slave Masculinity in the American South expands the conversation surrounding enslaved masculinity and spurs new inquiries into the intersection of race and gender.'