Home
The Creative Wealth of Nations

The Creative Wealth of Nations

Can the Arts Advance Development? 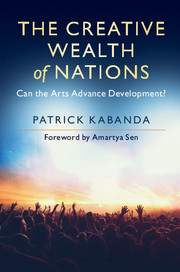 Development seen from a more holistic perspective looks beyond the expansion of material means and considers the enrichment of people's lives. The arts are an indispensable asset in taking a comprehensive approach toward the improvement of lives. Incorporating aspects of international trade, education, sustainability, gender, mental health and social inclusion, The Creative Wealth of Nations demonstrates the diverse impact of applying the arts in development to promote meaningful economic and social progress. Patrick Kabanda explores a counterintuitive and largely invisible creative economy: whilst many artists struggle to make ends meet, the arts can also be a promising engine for economic growth. If nations can fully engage their creative wealth manifested in the arts, they are likely to reap major monetary and nonmonetary benefits from their cultural sector. Drawing from his own experience of the support music provided growing up amidst political and economic turmoil in Uganda, Kabanda shows us the benefits of an arts-inclusive approach to development in Africa, and beyond.

‘Creativity and imagination go together. One leads to the other. Kabanda hits the very central point of human progress, the creativity and how it relates to development. Without inspiration for imagination the world is a dead place. Kabanda presented in a very convincing way the role of creative industry and arts in the broad framework of development discourse. Anybody interested in development must read it. It gives a completely new perspective.'

‘The Creative Wealth of Nations very originally calls our attention to the role of the arts and intellectual progress in increasing economic growth. It is marked by an interesting combination of surveying research and anecdote and will be very persuasive in introducing a new element of policy.'

‘All individuals and all communities live by the stories they tell and by the music they produce. The Creative Wealth of Nations opens up a new field in economic development by showing the importance of the arts, in people's economic and social lives. As a dividend to the reader, this superbly written book is itself a work of art: with every page filled with fascinating observations and facts.'

‘This is an important book which shows how the arts can nurture creativity and promote economic growth and development. Patrick Kabanda grew up in Uganda, amidst the strange duality of the sound of music at home, and political conflict outside, casting shadow on a child's life. When Kabanda, a talented musician and composer with interest in economic development, came to the World Bank to work with me I was curious about what he would contribute. Among his other work during this period, was this book. It draws on his early experience and later research, and is a must read whether you are interested in art and arias, or growth rates and gross incomes.'

'The distinctive feature of Patrick Kabanda’s book is that it brings together his knowledge of the arts, as a practitioner of music, with his experience and training in international affairs. He adds his understanding of Africa to his observations and experience of growth in developed countries. With his unique background, he points out the varying qualities and levels of development of the multitude of people in such places as Africa and how they might be joined to global business initiatives and development priorities. The result is a distinctly African approach to development across the world, especially on the continent that will one day play a major role in global business and social development.'