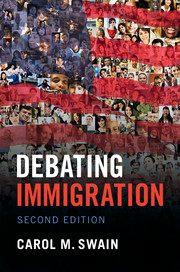 Debating Immigration presents twenty-one original and updated essays, written by some of the world's leading experts and pre-eminent scholars that explore the nuances of contemporary immigration in the United States and Europe. This volume is organized around the following themes: economics, demographics and race, law and policy, philosophy and religion, and European politics. Its topics include comprehensive immigration reform, the limits of executive power, illegal immigration, human smuggling, civil rights and employment discrimination, economic growth and unemployment, and social justice and religion. A timely second edition, Debating Immigration is an effort to bring together divergent voices to discuss various aspects of immigration often neglected or buried in discussions.

‘Carol M. Swain has a knack for identifying important issues of social welfare policy before other analysts. From her background and research, she sees issues, trends, and perspectives in an important way. Hers is a voice that needs to be part of any conversation on immigration.'

‘This collection of reasoned and informed articles is a welcome intervention in the politically toxic and shrill debate on immigration. It should contribute to a balancing of conflicting interests for the common good.'

‘Some Americans favor immigration, some oppose it, and most academics are all too united in defending it. Carol M. Swain and her contributors treat the divisions clearly and fairly. She achieved that in the first edition of Debating Immigration, and now she has done it again. This book is engrossing and disturbing, because the subject is. America's future is on the anvil.'

‘The timely publication of this second, updated, edition of Debating Immigration is a welcome event. In this volume, editor Carol M. Swain has gathered an impressively knowledgeable and ideologically diverse set of contributors, who comprehensively address the immigration issue in all of its moral, legal, economic and political complexity. As an added bonus, Professor Swain provides her own trenchant and, to this reader, persuasive critical assessment of how the interests of rank-and-file black Americans are ill-served by the positions taken on this issue by liberal elites.'

‘Thoughtful. Challenging. Wide-ranging. The updated edition of Debating Immigration offers new and dynamic perspectives on one of our nation's most important issues. Readers from across the political spectrum will see their most cherished ideas effectively elucidated and constructively interrogated. Professor Swain has assembled a magnificent group of thinkers whose efforts combine deep philosophical debates with powerful calls to action. A critical and highly valuable contribution.'