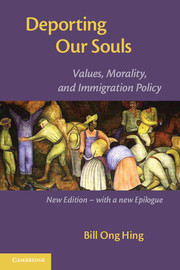 In the past three decades, images of undocumented immigrants pouring across the southern border have driven the immigration debate and policies have been implemented in response to those images. The Oklahoma City bombings and the tragic events of September 11, both of questionable relevance to immigration policy have provided further impetus to implement strategies that are anti-immigration in design and effect. This book discusses the major immigration policy areas - undocumented workers, the immigration selection system, deportation of aggravated felons, national security and immigration policy, and the integration of new Americans - and the author suggests his own proposals on how to address the policy challenges from a perspective that encourages us to consider the moral consequences of our decisions. The author also reviews some of the policies that have been put forth and ignored and suggests new policies that would be good for the country economically and socially.

‘I … agree with Professor Hing's call for reaching out to newcomers for greater civic and economic participation. When immigrants do well, we all do well. To do so is to set a path, a way forward for the nation as a whole to a new prosperity and greater opportunity for all. It's a vision of the country we can become, an America that embraces the values and aspirations of our people now and for coming generations.'

Senator Edward Kennedy - from the Foreword

‘This book is a poignant reminder that the immigration debate has an enormous impact on the soul of America. Hing provides badly needed insight and thoughtful analysis to a difficult debate.'

‘This book provides an important perspective, Hing reminds us, through the lens of both history and the stories of real families today, that what is at stake in the current immigration debates are the most fundamental values that have shaped us as a nation.'

‘Bill Hing has been on the front lines of the red-hot immigration debate for years. He brings the perspective of someone with intimate knowledge of the law, of the immigrants, and of the policy and political debate that surround both. But he steers clear of engaging the topic with the arid cost-benefit analysis of the economist, or the technical hair-splitting of the lawyer, or the calculated cynicism of the policy maker. Instead, he brings an informed and inspired moral clarity to the debate, one that is driven by named human beings seeking a better life in a nation struggling to transcend its antagonism towards newcomers so that we can live up to its finest ideals and best traditions. This book is filled with heart and soul, two qualities badly needed in current debate.'

‘Only Bill Hing - our nation's leading thinker about immigration policy and very best immigration lawyer - could have written this astonishingly knowledgeable, refreshingly trustworthy, and deeply wise book. Deporting Our Souls guides us through our uneven immigration history, our contradictory behavior toward immigrants, our available slate of morally forceful and practically sensible approaches to current realities. While dealing directly with arguments about the economic, cultural, and social consequences of immigration, Hing challenges us to see through hysterical and misleading debate and to recognize the wisdom already to be found in how some neighborhoods, small towns, and metropolitan areas have embraced immigrants as part of our national community. Choosing the trajectory Hing endorses would be an honorable achievement - especially for the most powerful country on earth.'

‘I think that Hing is ethically on the mark in this informative book.'

'… the logic of the author's moral argument is clear enough to motivate a serious re-examination of the current direction of American immigration reform.'