Managing Disorder in the Islamic Republic of Iran 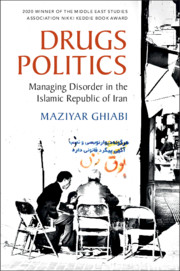 Iran has one of the world's highest rates of drug addiction: estimated to be between 2 and 7 percent of the entire population. This makes the questions that this book asks all the more salient: what is the place of illegal substances in the politics of modern Iran? How have drugs affected the formation of the Iranian state and its power dynamics? And how have governmental attempts at controlling and regulating illicit drugs affected drug consumption and addiction? By answering these questions, Maziyar Ghiabi suggests that the Islamic Republic of Iran's image as an inherently conservative state is not only misplaced and inaccurate, but in part a myth. In order to dispel this myth, he skilfully combines ethnographic narratives from drug users, vivid field observations from 'under the bridge', with archival material from the pre- and post-revolutionary era, statistics on drug arrests and interviews with public officials. This title is also available as Open Access on Cambridge Core.

'Maziyar Ghaibi’s book is a fascinating study of the politics and lifeworld of illicit drugs, one that reveals a great deal about the paradoxical nature of politics in the Islamic Republic. Empirically rich and analytically rigorous, this first comprehensive account of drug politics in Iran is likely to remain a standard text.'

'A refreshing and rare on-the-ground analysis of Iranian lived politics through the prism of drugs. With a rare depth and width of archival research and discourse analysis, Ghiabi brings us a unique combination of exquisite storytelling, inter-disciplinary inquiry, and ethnographic possibilities. Situated in a global perspective, Drugs Politics offers a fresh alternative to exceptionalist and oft-essentializing trends in studying Iran. A tremendous achievement toward a much needed holistic understanding of policy, Iran, and life itself.'

Orkideh Behrouzan - School of Oriental and African Studies, University of London and author of Prozak Diaries: Psychiatry and Generational Memory in Iran

'This is a landmark study, an eye-opener for those who still associate the Islamic Republic with a harshly punitive stance on narcotics. Iran, a society in which opium was traditionally integrated into life, has in recent decades been hit by a wave of synthetic drugs - heroin, meth and crack - that are now massively used by the down and out as well as by its globalized, anomic youth. Given wide access to official policy makers, Ghiabi tells the story of how the authorities of the Islamic republic have dealt with this problem by opting for harm reduction rather than criminalization, how they abandoned the shah’s unimaginative American-style 'war on drugs' and, working with NGOs and international organizations, adopted a pragmatic, neo-liberal approach that mixes draconian measures against dealers with a compassionate, welfare-focused approach vis-à-vis users. Anyone curious about Iran’s innovative approach to drugs should read this deeply informed, engaging book.'

'With historical sweep and ethnographic insight, Ghiabi makes the politics of drug consumption and addiction visible to audiences which have preferred to observe these matters from above and afar. His tale of drug politics in the Islamic Republic will not only be surprising for most Iranians, but also crafts a provocative lens with which to rethink our views on state-society dynamics across the world.'

Kevan Harris - University of California, Los Angeles and author of A Social Revolution: Politics and the Welfare State in Iran

'In this comparatively informed study, Maziar Ghiabi untangles the ironies and ambiguities of Iranian drug policies before and after the revolution of 1979. Based on rigorous fieldwork, this book is the foundational text for future research on Iran’s drug problems.'

'Through rigorous archival investigation and courageous ethnographic inquiry, Maziyar Ghiabi traces the history of public responses to the drug epidemic in Iran and analyzes the current challenges of its management. Illuminating the tensions between punitive and reformist approaches, he provides a fascinating account of the Islamic Republic’s government of crises.'

‘[Ghiabi] has done some remarkable field work, interviewing addicts and officials at the highest and lowest levels of society to produce a vivid dissection of the Iranian body politic in all its humanity, its saints and sinners.’