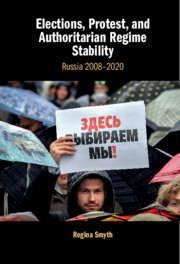 In a path-breaking study of Russian elections, Regina Smyth reveals how much electoral competition matters to the Putin regime and how competition leaves Russia more vulnerable to opposition challenges than is perceived in the West. Using original data and analysis, Smyth demonstrates how even weak political opposition can force autocratic incumbents to rethink strategy and find compromises in order to win elections. Smyth challenges conventional notions about Putin's regime, highlighting  the vast resources the Kremlin expends to maintain a permanent campaign to construct regime-friendly majorities. These tactics include disinformation as well as symbolic politics, social benefits, repression, and falsification. This book reveals the stresses and challenges of maintaining an electoral authoritarian regime and provides a roadmap to understand how seemingly stable authoritarian systems can fall quickly to popular challenges even when the opposition is weak. A must-read for understanding Russia's future and the role of elections in contemporary autocratic regimes.

‘Smyth's book is a masterful dissection of the dynamics of regime-society interactions in one of the world's largest hybrid regimes. To unpack political survival and opposition resilience, Smyth takes the reader through meticulously researched evidence of constant adjustment of authoritarian regime and opposition behaviour in Russia. The rapid, strategic and tactical institutional and information updating and shifts in regime-opposition tactics problematise widespread assumptions about the essence of Russia's political regime in any given electoral cycle. A tour de force. This book should be on the shelf of any scholar of comparative politics grappling with the question of resilience of both regime and oppositional society in XXI century authoritarian polities.'

‘Regina Smyth focuses her analysis of Russian political dynamics on the conflict between authoritarian regime and oppositions of different colors. Using formal modelling, statistical analysis of survey data, and narrative accounts of ongoing changes, she convincingly explains the sources of Russia's regime stability and the challenges caused by public protests. This book is really important for an understanding of authoritarian politics across the globe.'

‘This landmark study of political opposition in Russia represents a major advance in the study of autocracy. Combining game theory, cross-national data, innovative surveys, and deep knowledge of the Russian case, Smyth convincingly debunks the popular notion that autocratic elections are meaningless. As this book shows, even uncompetitive elections fundamentally shape the political strategies of regime and opposition by incentivizing organization, spawning protest movements, and revealing new information. Theoretically rigorous, substantively important, and empirically rich - this is comparative politics at its best.'

‘In this path-breaking book, Smyth reveals how Russia's electoral authoritarian political system is in constant motion as the regime and its opponents maneuver for advantage. The Kremlin has to innovate and adapt to maintain its electoral dominance, even though the game is rigged and it holds most of the cards. Drawing on a wealth of original new data, including interviews, surveys, and focus groups, this compelling study shows how opposition groups and average citizens make sense of and respond to this changing landscape. Putin's two decades in power, Smyth makes clear, obscure a political dynamism that could yield future disruptions and surprises.'

‘Theoretically rich, impressively researched, and full of fascinating detail, Smyth's new book shows how protests can alter the course of even the strongest authoritarian regimes. It is surely one of the best political science books on Russia in recent years.'