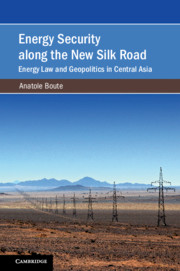 Guaranteeing energy security is one of the most complex challenges of energy law and policy. Energy insecurity threatens economic development, social peace and stability. This book focuses on energy security in the strategically important region of Central Asia. The region holds huge energy reserves, but its energy systems are highly inefficient and unreliable, and thus require urgent reform. However, endemic corruption, discrimination and the strong centralization of power have so far blocked initiatives to reorganize energy supply. The case of Central Asia is uniquely relevant for understanding the informal constraints on energy law and policy. In addition, Central Asian energy insecurity illustrates the impact of geopolitics on the regulation of energy markets. The region is strategically located in Russia's sphere of influence and along China's New Silk Road. Its energy situation highlights the complex interactions amongst energy law, geopolitics and institutions.

‘This book fills a substantial gap in our knowledge on the topic of energy security and reform of energy market structures in Central Asia, which has rarely been examined from the perspective of regionalism, law, political economy and geopolitics as one integrated theme. One of the core strengths of this very comprehensive survey of Central Asian energy is the highly thorough manner with which the author guides the reader through key phases of energy market reform, with special focus on the role of local judiciary systems. It also puts in the spotlight the limits of energy market liberalization as initiated by international donors and examines China’s Belt and Road Initiative.  Readers will benefit strongly from the author’s firsthand knowledge of the subject matter in the Central Asian region and of his understanding of Russian (traditional) and Chinese (new) factors in local decision making processes.’

‘The Belt and Road Initiative, often referred to as the New Silk Road, is a project of enormous dimensions and of great importance to the global economy. One core element of the Belt and Road Initiative is energy, in particular energy security. This is why the oil and gas rich Central Asian countries play a pivotal role. In this book Professor Boute draws together and analyzes the economic, geopolitical and legal aspects of the central role of energy security with respect to Central Asia. He does it in a masterful way. This book establishes him as one of the foremost scholars on energy issues relating to the New Silk Road. His book is required reading for anyone wishing to understand the economic, legal and political dimensions of energy security in the context of the Belt and Road Initiative.’

'The geopolitics of the New Silk Road culminate in Central Asia, a region that is key to China’s outward resource strategy. Anatole Boute excels in navigating a historically and politically highly complex region. Linking geopolitics back to markets and regulatory governance, the book is also a key reference point for anyone interested in energy politics in Central Asia.’

‘… [a] carefully researched book … Boute has provided an innovative and useful multidisciplinary analysis of energy sector reform in Central Asia, drawing on law, institutions and geopolitics. This book should be read by academics, policy analysts and energy industry strategists; not just those working on central Asia but also in other parts of the world where institutions have a strong tendency to undermine the best laid plans.’

‘Energy Security Along the New Silk Road is distinct for it explores a variety of legal components of energy reforms in Central Asia linking them with the state of energy security in a region with an intricate geopolitical context. In the opening, Boute observes that between two models of energy markets - monopolized and competitive - the latter, the deregulated energy market requires more regulation because it involves multifaceted market structure, diverse transactions, and various players. The author presents original comprehensive research, in which the sundry problems of the existing national and regional energy markets are characterized, the cause-effect linkages are analyzed, and the implications are discussed. Finally, and very importantly, Energy Security Along the New Silk Road is convincingly precise in the analysis of the covered topics. This virtue is attained through referencing a massive body of scholarly work, official regulatory documents, and national media sources.’