Home
The Ethics of Influence

The Ethics of Influence

Government in the Age of Behavioral Science 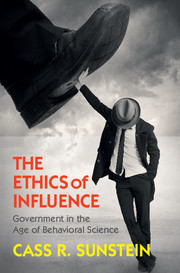 In recent years, 'nudge units' or 'behavioral insights teams' have been created in the United States, the United Kingdom, Germany, and other nations. All over the world, public officials are using the behavioral sciences to protect the environment, promote employment and economic growth, reduce poverty, and increase national security. In this book, Cass R. Sunstein, the eminent legal scholar and best-selling co-author of Nudge (2008), breaks new ground with a deep yet highly readable investigation into the ethical issues surrounding nudges, choice architecture, and mandates, addressing such issues as welfare, autonomy, self-government, dignity, manipulation, and the constraints and responsibilities of an ethical state. Complementing the ethical discussion, The Ethics of Influence: Government in the Age of Behavioral Science contains a wealth of new data on people's attitudes towards a broad range of nudges, choice architecture, and mandates.

'In this era of intransigence and intolerance, The Ethics of Influence is a vitally needed book. It embraces what all of us - left, right, and center - mutually want: a balance between the goals of welfare, autonomy, dignity, and self-government. What’s more, it is a hoot to read. Roll over Mill and Marx; tell Hayek and Gramsci the news.'

'As more governments and businesses turn to ‘nudging', pioneer Sunstein turns his brilliant mind to building an ethical framework for these powerful approaches. New findings on public attitudes to nudges - showing surprisingly high levels of support even among traditionally skeptical Americans - are combined with Sunstein’s trademark clarity of thought to offer a timely framework that will be influential across the world.'

'In a book full of convincing detail but free of dogmatism, Sunstein walks us through the case for and against nudges. Nudges are, in some circumstances, the best tool government has at its disposal - cheaper than financial incentives, more freedom-preserving than mandates, and more effective than information. Our government is sometimes ethically required to nudge us. Nonetheless, nudges raise legitimate ethical concerns, foremost among them that they can be manipulative. Sunstein ultimately makes a powerful argument for the widespread use of nudges by government, but without shortchanging the ethical arguments on both sides.'

'One need not agree with all of Cass R. Sunstein’s arguments about nudging to admire him for doing more than anyone to champion the importance of behavioral science for public policymaking. Owing to him, it is an increasingly recognized ethical imperative to measure government actions not only against societal values but also against evidence.'

‘Cass R. Sunstein knows more than anyone about nudging, and in this very insightful book he brings his acute reasoning to understanding the ethics behind choice architecture. Here, he considers sources from Mill to Hayak to Ostrom, and argues that choice architecture is unavoidable and in many cases it is the right thing to do. Just as importantly, he talks about when nudging is wrong and when it is manipulative. All in all, it is an essential book for anyone interested in the ethics of behavioral intervention, either by governments or firms.’

'Behavioural regulation has spread to governments worldwide. This brilliant book tackles the many myths that have evolved around the use of behavioural economics in politics. Cass R. Sunstein explains in clear words how (and why) the core values of an Ethical State - welfare, autonomy, dignity, and self-government - are indeed best served by governments that carefully base their policies on an empirical foundation and use behavioural insights as additional effective policy tools.'

‘We typically consider ourselves rational actors, whose dignity derives from our autonomy. In fact, our behavior is easily shaped by other actors and by external factors, often outside our awareness and control. When government intervenes to influence our behaviors, often to improve our lives, we recoil. But if government remains uninvolved while other interests are free to shape our world, how autonomous are we then? Sunstein confronts our naiveté with a penetrating discussion about how to balance government influence against personal dignity, manipulation against autonomy, and behavioral facts against political ideals. This book is an engrossing read.’

'In a fascinating survey section, which asks Americans and others what they actually think about being the subjects of the 'architecting' of their choices, Sunstein discovers that 'if people are told that they are being nudged, they will react adversely and resist' … That rebellious, rock-star figure on the cover is entirely appropriate. The ethics of human creativity, and the structural conditions which support its flourishing, may prove to be the ultimate challenge to the nudgers.'

'… [a] tightly argued and admirably clear book … [and] an excellent primer of the relevant debates on nudges, and a sharp rejoinder to the more superficial objections.'

'This is a complex area and the book is appropriately complex, weaving through a myriad of ethical issues, at times a work of philosophy and at other times a tentative guide - a nudge in preferred directions - for government officialdom.'

'… this most enjoyable of studies consists of eight chapters that most coherently traverse the quagmire of both ethical and non-ethical (political) persuasion, and it does so in such a way that is formidably comprehensive and believable.'

'Sunstein has drawn much attention with his work on 'nudges' and the concept of 'choice architecture', the background conditions for popular choices, which underlies much of public policy … This volume examines the ethical implications in its use and the desired constraints on choice architecture by governments. Sunstein concentrates on four basic values that offer a measuring rod for such judgments: human welfare, personal autonomy, dignity, and self-government. In this inquiry, he asks what an ethical state should do and avoid and how it should distinguish between influence and manipulation … This excellent study of a sensitive topic for a wide variety of readers builds on Sunstein’s earlier work. Summing Up: Highly recommended. Upper-division undergraduates through faculty.'

‘Sunstein has written a highly accessible book on a form of government intervention called nudging. The intended audience is the general public. It can be recommended reading to psychologists at all levels, ranging from college students to graduate- and postgraduate level researchers. It would be appropriate for courses on political psychology, behavioral consultation, applied psychology, and critical psychology. Sunstein’s analysis is relevant to all psychologists, no matter which side of the fence you are on concerning the ethical issues of government influence. If you aspire to serve the government as a behavioral scientist on nudging, you will find in this book a wise and practical guide.’

'The first instinct when considering a nudge is whether it will work - how effective it will be. But Sunstein adds a new dimension: Is it moral or unduly manipulative?'