Home
The Fed and Lehman Brothers

The Fed and Lehman Brothers

Setting the Record Straight on a Financial Disaster 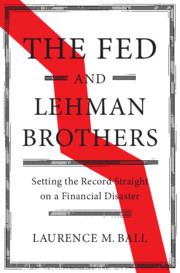 The bankruptcy of the investment bank Lehman Brothers was the pivotal event of the 2008 financial crisis and the Great Recession that followed. Ever since the bankruptcy, there has been heated debate about why the Federal Reserve did not rescue Lehman in the same way it rescued other financial institutions, such as Bear Stearns and AIG. The Fed's leaders from that time, especially former Chairman Ben Bernanke, have strongly asserted that they lacked the legal authority to save Lehman because it did not have adequate collateral for the loan it needed to survive. Based on a meticulous four-year study of the Lehman case, The Fed and Lehman Brothers debunks the official narrative of the crisis. It shows that in reality, the Fed could have rescued Lehman but officials chose not to because of political pressures and because they underestimated the damage that the bankruptcy would do to the economy. The compelling story of the Lehman collapse will interest anyone who cares about what caused the financial crisis, whether the leaders of the Federal Reserve have given accurate accounts of their actions, and how the Fed can prevent future financial disasters.

‘What caused the financial crisis of 2008? Are policymakers ready to handle the next one? These are key questions for anyone interested in economic history and policy. In the past decade, a conventional wisdom has developed about the answers. Yet a new book questions that orthodoxy, offering a more disturbing perspective on the past and a less sanguine prognosis for the future.’

‘Ten years after the Lehman Brothers collapse, one might think that it’s time to end the debate over its causes. Laurence M. Ball, an economics professor at The Johns Hopkins, doesn’t agree. He makes a persuasive case that a key lesson remains overlooked: that the Lehman failure and the market crash that followed didn’t have to happen and that the political response, the 2010 Dodd-Frank banking law, has made future financial crises more likely, not less … Mr Ball’s argument that Dodd-Frank contains the seeds of further politically motivated fiascoes is persuasive - and worrisome.’

'Laurence M. Ball has produced a brilliant and riveting study of the most important moment of modern financial history: the failure of Lehman Brothers in September 2008. In a remarkably detailed and careful analysis Ball argues that decisions were driven by politics rather than sound policy. In short, this is a must-read masterpiece of financial and historical analysis.'

'Government failure to rescue Lehman Brothers investment bank, and its bankruptcy in September 2008, precipitated a monumental financial crisis. Laurence M. Ball combs through a mass of documents, and presents a new and quite disturbing perspective on the events. Some may disagree with his take, but it is a milestone in the historical analysis of the crisis.'

'A monumental piece of scholarship that is essential for understanding the financial crisis of 2008 - and the Great Recession that followed. Meticulous, gripping, and compelling.'

'With unprecedented and exciting investigative research, Laurence M. Ball convincingly puts forth an important new view of the financial crisis, uncovering fundamental inconsistencies in the government’s often-told story of its role in the Lehman Brothers bankruptcy and the panic of 2008. He shows that the Fed could have legally prevented the bankruptcy, but didn’t do so either because of political concerns or a botched implementation of its game plan.'

'The official narrative of any crisis is not always the most accurate. Professor Laurence M. Ball’s authoritative account of Lehman’s demise debunks the Fed’s narrative of the calamity and raises uncomfortable questions about the Fed’s inconsistent use of its discretionary authority. This captivating book should be required reading for anyone with a stake in preventing the next financial collapse.'

'Ball supports his hypothesis with ample documentation. Whether readers come away convinced that the Fed made a grievous error in not being the lender of last resort to Lehman will probably depend on their view of the Fed. And even if future Fed leaders 'take the Lehman lesson to heart', they may be hamstrung in their actions.'

‘Laurence Ball's new book The Fed and Lehman Brothers is an excellent book on the 2008 Financial Crisis … This is a valuable lesson I have learned from Professor Ball's explanation of how the Fed could have saved Lehman. Merely by broadening the types of collateral accepted for cash funding from the Fed and maintaining the functioning of the repo market, the Fed can ensure solvent financial institutions being able to withstand the turbulence of financial crisis.’

'The bank that precipitated the [financial] crisis was Lehman Brothers. In The Fed and Lehman Brothers, [Laurence M. Ball], a senior American economics professor, has written an entire book on this episode, based on a careful archival reconstruction of events. His findings are fascinating and significant, and so is his villain: not Lehman Brothers but the Federal Reserve.'