The Specter of Nazism from World War II to the Present 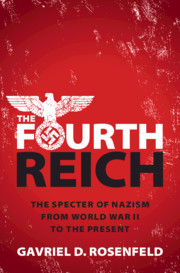 Ever since the collapse of the Third Reich, anxieties have persisted about Nazism's revival in the form of a Fourth Reich. Gavriel D. Rosenfeld reveals, for the first time, these postwar nightmares of a future that never happened and explains what they tell us about Western political, intellectual, and cultural life. He shows how postwar German history might have been very different without the fear of the Fourth Reich as a mobilizing idea to combat the right-wing forces that genuinely threatened the country's democratic order. He then explores the universalization of the Fourth Reich by left-wing radicals in the 1960s, its transformation into a source of pop culture entertainment in the 1970s, and its embrace by authoritarian populists and neo-Nazis seeking to attack the European Union since the year 2000. This is a timely analysis of a concept that is increasingly relevant in an era of surging right-wing politics.

'Gavriel D. Rosenfeld's new book is a brilliant and very timely exploration of something that never happened. It examines how it is that people after WWII imagined the possibility of a Fourth Reich, in whatever form or shape. As the history of a political concept that spoke to the preoccupations of postwar transatlantic societies, it is a very distinctive addition to our understanding of the stability of democracy in postwar Germany and the postwar West more broadly.'

'Gavriel D. Rosenfeld, the pioneer of counterfactual history, has written a disturbing book. The Fourth Reich illuminates that the fears and fantasies about a new type of Nazi regime have preoccupied Western societies since 1945. This book couldn’t be more timely.'

Thomas Kühne - author of The Rise and Fall of Comradeship: Hitler’s Soldiers, Male Bonding and Mass Violence in the Twentieth Century

'After two earlier forays into the Third Reich's counterfactual history, Gavriel D. Rosenfeld now returns for another equally original and imaginative exploration, patiently dissecting the dreams, anxieties, and speculations associated with the idea of a Fourth Reich. In retrieving these complicated and often surprising post-1945 after-lives of Hitler and his regime, no one is more careful and accomplished.'

Geoff Eley - author of Nazism as Fascism: Violence, Ideology, and the Ground of Consent, 1930–1945

'This insightful book explores the history of the Fourth Reich: while it never existed, fears (and sometimes hopes) that it might come about certainly did. Rosenfeld sheds light on these, as well as on their political context and cultural expression. A fascinating and original study.'

Bill Niven - author of Facing the Nazi Past

'Marshals a variety of sources - political speeches, newspaper clippings, slices of cinema - to offer a sharp counterfactual investigation that reveals how discourse on the Fourth Reich has meaningfully shaped postwar culture.'

'Intriguing … Rosenfeld's thoughtful dissection of the origins and inflationary use of the term 'Fourth Reich' [is] timely and welcome.'

'… very insightful … These kind of counterfactuals reveal the power of the idea of the Fourth Reich.'

'The real value of this book lies in its insights into the distorting power of historical memory … [an] intriguing study.'

'American scholar Gavriel D. Rosenfeld deftly examines this slogan in all its variations, while reminding us that it was never more than a theoretical construct in post-war German history.'

‘A leading practitioner of counterfactual history, Gavriel Rosenfeld has produced a fascinating account of the perils and pitfalls of our century-long obsession with the ‘Fourth Reich.’ In navigating a dizzying array of sources, drawn from politics, government archives, mass media, and popular culture, Rosenfeld examines ‘the history of what might have happened’ in order to ‘better understand the memory of what actually did’.’